Tragic news from Virginia today — a man named Albert Peterson killed his family and himself because he "felt that our God-given rights were being taken away." Family friends are also telling the press that Peterson feared that government spending would "be on the backs of his boys."

The whole incident has me thinking about family annihilators in the Early Republic, who were also faced with a profound shift in political power during their lifetimes. Like Americans in the Early Republic, modern Americans are seeing traditional structures of patriarchal power crumble, and some of them are reacting with violence. I'm reposting a piece I wrote several years ago on the deaths of the Beadle family of Wethersfield, CT:

On December 11, 1782, William Beadle of Wethersfield, CT attacked his family with a knife and an axe, killing his wife and all four (or five?) of his children. He then committed suicide by shooting himself with a pistol. The family's maid was the only survivor of the household — William sent her to bring a letter to a neighbor just before the attack. The letter turned out to be a confession, but by the time the neighbors arrived at the house, it was too late.

William Beadle was not the only 18th-century American to murder his family. Many modern readers will be familiar with the Purrinton murders, a case publicized by Laurel Thatcher Ulrich in her Pulitzer Prize-winning A Midwife's Tale. Between 1780 and 1840, at least seven American men committed acts of familicide, crimes that were widely publicized in sensational (and very popular) pamphlets. Daniel Cohen, author of "Homicidal Compulsion and the Conditions of Freedom," argues that family annhilators "were profoundly traumatized by the radical new 'conditions of freedom' experienced by common Americans in the early republic, particularly the new geographic mobility, economic instability, and religious liberty." 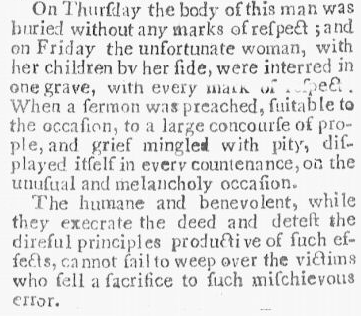 I have not been to the graveyard in Whethersfield, so I don't have a picture of Lydia Beadle's grave. I don't want to steal other people's photos, but I will link to them (here and here).


Here lie interred Mrs. Lydia
Beadle Age 32 Years
Ansell Lothrop Elizabeth Lydia & Mary
Beadle her Children: the eldest aged
11 and the youngest 6 years Who
on the morning of the 11th day of Decr AD 1782
Fell by the hands of William Beadle
an infatuated Man who closed the
horrid sacrifice of his Wife
& Children with his own destruction.
Pale round their grassy tombs bedew's with tears,
Flit the thin forms of sorrow and of fears;
Soft sighs responsive swell to plaintive chords,
And Indignations half unsheath their swords.
Posted by Caitlin GD Hopkins at 5:55 PM

In my local Fitchburg cemeteries I know of two burials of suicides (1804 and 1805), and they are not set apart in any way. One is in fact the town's first minister, Rev. John Payson, who was known to have had mental infirmities for some time, and had already stepped down from the pulpit. The other was just a regular townsman who was found to have hanged himself "in a fit of insanity." He was given a sudden-death verse that is appropriate to a suicide, but doesn't seem necessarily connected with that particular cause of death: “A sprightly branch, one moment stood, | Next, summon’d to the bar of God! | Think reader! can thy heart endure, | A summons to a bar so pure?”