The town of Osceola, Missouri has passed a resolution asking the Kansas University Jayhawks to change their mascot because it celebrates "domestic terrorists." This week will mark the 150th anniversary of the Sacking of Osceola, an 1861 raid in which Unionist Jayhawkers attacked and burned the town, killing nine civilians. This incident was one in the long string of vigilante attacks that characterized Bleeding Kansas before and during the Civil War.

The University of Kansas is obviously resistant to this idea. A KU spokeswoman issued the following statement by email:


A Jayhawk is a blue bird with a red head and a big yellow beak that wears boots. It would be hard to confuse it with anyone with terrorist intent, though we admit we have been terrorizing the Tigers on the basketball court for some time. Tigers have been known to kill people. Bears, too.

The University may want to rethink its flippancy on this issue. Jayhawks are not really just birds. But, then, Tigers are not really tigers, either, but rather, the Columbia Fighting Tigers, a home-guard unit that protected Columbia, MO from Confederate bushwhackers during the war. I could stand to see both teams cheered on by a Unionist militiaman.

No word on whether the citizens of Osceola, more than 97% of whom are white, will be changing the name of their town any time soon.
Posted by Caitlin GD Hopkins at 9:31 AM 2 comments:

I'm off to Connecticut this evening to prepare for a talk I'm giving at the Stanley-Whitman House in Farmington on Saturday. The museum is hosting a symposium on 17th-Century Connecticut and I will be speaking about the Dorchester Removal. In 1635, a large number of the inhabitants of Dorchester, Massachusetts pulled up stakes and moved to Connecticut. Why? Short answer: regional identity, political/ecclesiastical differences with the Massachusetts government, and economics.
Posted by Caitlin GD Hopkins at 9:40 AM No comments: 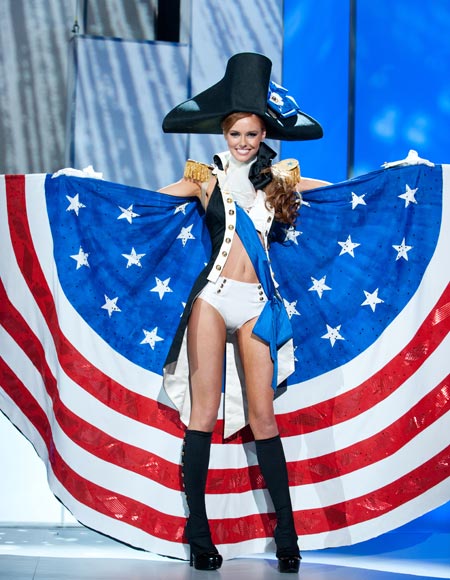 If you're looking for inspiration for your Halloween costume, look no further than the Miss Universe 2011 National Costume competition. Sexy Big Bird is so 2010.

Past Miss USA National Costumes below the fold: