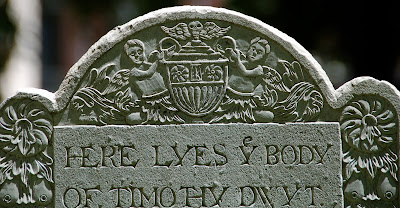 Recently, I have been enjoying listening to books through Audible as I walk to campus or do chores. Pete and I have a membership that gives us one book a month and discounts if we want more than that. In the past few months, I've gone through What Hath God Wrought, The Great Cat Massacre, Battle Cry of Freedom, Misquoting Jesus, This Republic of Suffering, and several others.

While listening to Marcus Rediker's The Slave Ship: A Human History, I was enormously distracted by the reader's continued mispronunciation of the thorn ("y^e") as "YEE." I've always assumed that "y^e" is pronounced "the" and that the "YEE" pronunciation was part of the joke when used in the phrase "ye olde." Just as I would pronounce "y^t" as "that" and "y^r" as "their," I would say "the" unless I were dictating and needed to distinguish the thorn from regular old "the."

But now I'm doubting myself. Ever since I listened to this book, I have been paying attention to the times when I've heard others read the thorn aloud (surprisingly, it has come up rather often — I suppose I travel in strange circles). More than half of the people reading old documents said "YEE" instead of "the" and now I'm all turned around. I was sure I was right, but now I'm not.

I'm putting a poll up in the sidebar. Since many of you are skilled in the ways of Early Modern English, I trust your judgment to set me straight.
Posted by Caitlin GD Hopkins at 11:16 AM

Since the thorn was originally pronounced "th", and since some people now pronounce it as "y", the historical question may be, "When did people begin mispronouncing the thorn?" And the answer may be, "Earlier than we might expect." So if we were to find that some people in the early 1800s were saying "ye" rather than "the" (because people had already forgotten what the thorn was), does that make "ye" an original and correct pronunciation? Or does it mean people in the early 1800s were just as linguistically ignorant as we are today?

Part of the problem is that we do have an old-fashioned word spelled and pronounced “ye,” nicely seasonal in “God rest ye, merry gentlemen.”

I think the thorn should be pronounced as “th,” except when making fun of touristy shops, in which case the introductory sounds “yee oldie” are perfectly appropriate.

Tangentially, do we have any experts here on the language reforms of the early Republic promoted by Noah Webster and his ilk? All sorts of changes were advocated to distinguish (independent) American from olde English, such as replacing colour and flavour with color and flavor.

There are at least three orthographic changes taking place at this time, all of them visible on gravestones: the thorn is dropped, the long-s is dropped, and old-style numerals are replaced with new-style numerals. In my small Fitchburg cemetery the last thorn is 1782, the last long-s is 1804, and the last old-style numeral is 1802. The chronology will be very similar across New England, although a detailed map of the exact sequence across the landscape would be fascinating.

Those are all good points.

I'll keep my eyes open for any evidence of people saying "ye" in the 19th century.

The point about "yee" as an archaic pronoun is a good one too. What do we make of "gather ye rosebuds while ye may"? Is that one article and one pronoun? Or can "ye" be both a possessive and a subjective pronoun?

All I know of Noah Webster comes from Jill Lepore's A Is For American. I haven't found any dates later than those, but I consider it a challenge now!

The long-s change mentioned by RJO was occurring around the world at this time. For more info, see these blog posts:
http://typefoundry.blogspot.com/2008/01/long-s.html
http://babelstone.blogspot.com/2006/06/rules-for-long-s.html

Both authors say that the demise of the long s was spurred by the creation of "modern face" type fonts which, in addition to stylistic changes, omitted the long s and its many ligature combinations. The first such typeface was created in Paris around 1781; one of the first British publications to omit the long s was a London newspaper published in 1787 by a John Bell. (J. L., are you reading this?) In British printed publications, the turning point was about 1800, after which the long s became increasingly rare.

Presumably, manuscript and gravestone use of the long s would have continued for some time after its use had ended in printing. But the long-s changes were independent of Noah Webster.