Jopsephely and the Sinking Apostrophes

Here's another stone from a Connecticut River Valley carver, though I'm not sure which one. The carver owes a lot to the Stebbins Family and William Holland for the crown and scroll motif, but this stone looks rougher than the others I've seen from the Stebbins workshop or Holland. Might it be an early stone by John Ely? I don't know the western Massachusetts carvers very well, but there is an extensive website dedicated to their work for anyone who is interested in the subject.

I was most interested in the lettering on this stone. Not only does the carver misspell "Joseph" (and Mary?) and employ idosyncratic capitalization, he uses commas as apostrophes in several instances. The words "died, " "April," "daughter," and "months" are rendered "di,d" "Apr,l" "daugh,r" and "mont,s." I've never seen anything quite like it. He also seems to place a tittle over his capital is, just like John Stevens I. 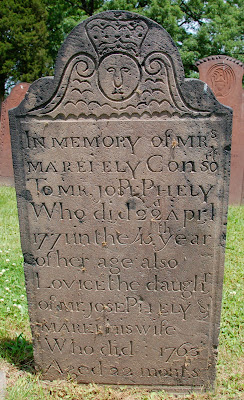