Samuel Sewall did not like Quakers. This was hardly an extraordinary position among Massachusetts Puritans, but Sewall was particularly strong in his disapproval, going out of his way to oppose Quakers even when his fellow Puritans were willing to give them a chance. In 1708, when a group of Quakers petitioned the Governor and Council for permission to build a meeting house in Boston, Sewall opposed the measure, saying that he, "would not have a hand in setting up their Devil Worship" (Sewall Diary 23 Aug. 1708).

In June of 1685, a small group of Quakers asked Governor Simon Bradstreet for permission to build a fence around the graves of the "Boston Martyrs" — Marmaduke Stephenson, William Robinson, Mary Dyer, and William Leddra — on Boston Common. These four Quakers had been executed in 1659 (Stephenson and Robinson), 1660 (Dyer), and 1661 (Leddra), for the crime of returning to Massachusetts to proselytize after being banished on a previous occasion. Their fellow Quakers wished to honor them and, no doubt, draw attention to their own continued presence in the colony. This was a particularly sore subject in 1685, as the colony's charter had been revoked the previous year, partially due to concerns about the lack of religious toleration in Massachusetts. When Governor Bradstreet brought this request before the Council, it was unanimously denied. Sewall, writing in his diary, noted that, "it is very inconvenient for persons so dead and buried in the place to have any Monument" (Sewall Diary 17 June 1685).

The Quakers were not big on obeying earthly authorities, so they went ahead and built the fence anyway.

In August, Sewall passed by the gravesite on his way to Dorchester and saw


a few Feet of Ground enclosed with Boards, which is done by the Quakers out of respect to som one or more hanged and buried by the Gallows: though the Governor forbad them, when they asked Leave.

Of course, today, there is a big statue of Mary Dyer next to the State House, but this commemoration was a dramatic gesture of defiance in 1685. 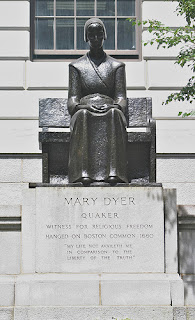 I don't recall -- is that burial site marked on the Common today?

Dunkle & Lainhart mention a Quaker meetinghouse and burial ground established on either Brattle Square in 1694 or later on Congress Street; but the burials there were reportedly removed to Lynn in 1826 after the Society disbanded.

Quakers generally did not generally use gravestones (as Robert Lowell reminds us), but the burial ground itself would ordinarily be delimited.

I don't think it is marked today. I would imagine that the topography of the Common has changed enough that the site no longer exists. They were supposedly buried very close to the gallows, so if anyone has identified the likely spot for that, they would have been nearby.

I would be unsurprised if the fence were taken down shortly after Sewall observed it.

I just checked — there is a 19th-century plaque commemorating the "Great Elm," which various people have dubbed, "The Hanging Elm." Numerous websites say that the Quakers were hanged from the branches of this tree, but I tend to doubt it.

Sewall says they had a gallows, and he is a keen enough observer that I think he would mention it if they were stringing people up from trees. I don't know if there is contemporary evidence for this "Hanging Elm" business, or if it's just Victorian nonsense.

My name is Harry Robinson and we are from a William Robinson born circa, 1640, place unknown and A direct decendency to me with various proof. We are said to be, by various historians, in the lineage of the Pilgrim John Robinson. However, we have a missing link, William Robinson's father and mother. Does anyone have any infomation on who and where, William Robinson, A martyr at Boston Common was?

The gallows from which the Quaker martyrs were hanged was not at all on Boston Common, but on Boston Neck, that narrow isthmus of land that connected the Boston peninsula to the mainland. The gallows were still there at the time of the American Revolution and can be seen on old maps.

Do you have something I could cite? I know the gallows were on the neck in the 18th century, but the only references I have seen in the 17th-century records are less specific. In 1650, the General Court ordered that the gallows be moved to "a convenient place of common" and in 1656 that they "be removed to the next knoll of land before the next execution." It's perfectly possible that a "place of common" referred to the Neck, which was common land as well. I just haven't seen any specific 17th-century sources yet. If you have some, I'd be grateful for them!