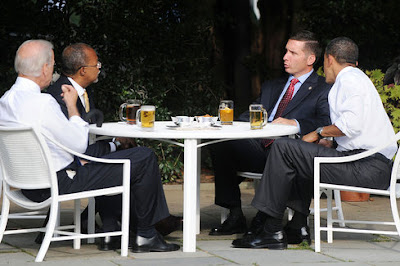 I've been enjoying Samuel Sewall's accounts of sightseeing in England during his trip in 1689 (he was part of the delegation attempting to renegotiate Massachusetts' charter). Along with the great buildings and libraries, Sewall visited plenty of graveyards and churches. One of these was the Jewish cemetery in London:


Went and saw the Jews burying Place at Mile-End: Some Bodies were laid East and West; but now all are ordered to be laid North and South. Many Tombs. Engravings are Hebrew, Latin, Spanish, English, sometimes on the same stone. Part of the Ground is improv’d as a Garden, the dead are carried through the keepers house. First Tomb is abt the year 1659. Brick wall built abt part. Ont’s two sides 5444, Christi 1684, Tamuz 21, June 23, as I remember. — I told the keeper afterwards wisht might meet in Heaven: He answered, and drink a Glass of beer together, which we were then doing.

Sewall still wanted to convert the Jews — his famous hymn, "Once More Our God Vouchsafe to Shine," contains a verse praying that the "harde'ned Jews" will learn to worship " their Rightful Lord" — but, apparently, beer has some sort of mystical power to unite people (briefly).
Posted by Caitlin GD Hopkins at 10:21 PM