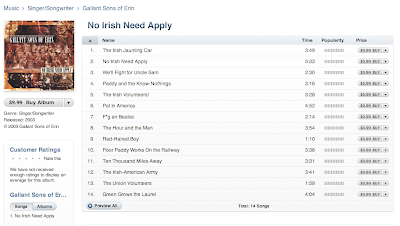 I was poking around on iTunes today, looking for a Christmas gift, and happened across the page for No Irish Need Apply (2003). For those of you who have not seen it before, this is a CD recorded by The Gallant Sons of Erin, a band composed mostly of my family members, reenacting buddies, and neighbors and specializing in Irish-American music of the mid-19th century. My Dad plays guitar and sings, my uncle plays banjo, I play tin whistle, our friend Todd plays bodhran, our neighbor Nan plays fiddle, etc. Most of the songs are related to the experiences of the 28th Massachusetts Volunteer Infantry during the Civil War.

Anyway, I had never seen its iTunes page before, so I was surprised to see that one of the song titles had been censored. "Fág an Bealach"* is the rallying cry of the the 28th MVI ("clear the way" in Irish), but it seems that iTunes read that first word as a slur and replaced the a with an asterisk. It's fun to see our album marked as potentially racy when, in reality, it is nuclear-level nerdy.


Come gallant sons of Erin who battle for the right,

Come show your Yankee brethren how Irish lads can fight!

The flag is waving o'er us and brightly gleams the day

We bear a noble motto,'twas heard in days of yore

When the famous Connaught rangers swept o'er the Spanish shore.

The foe went down before it, and so they will the day

Our gallant comrades gone before have opened wide the track,

The bloody lash shall fall, but not this time on Cuffee's back.

Come on, me boys, the hunt is up, seceshes clear the way!

The soul of Robert Emmet gleams from out each patriot eye.

Lord, help the southern cohort, who in the battle's fray

Shall hear our Irish slogan, "seceshes, clear the way!"

* Sometimes spelled "Faugh a Ballagh." When I was about 13, we had a pair of kittens named Faugh and Ballagh.
Posted by Caitlin GD Hopkins at 11:38 PM