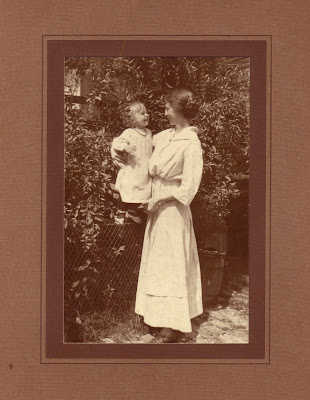 I apologize for the lack of new posts lately. Gravestones usually get pushed to the back burner during this time of year.

In our family, this hidden week between Christmas and New Year's is often devoted to working on family history and going through old photographs. This year, I've been helping Pete's mom scan several hundred photographs from the Pownall family (Pete's paternal grandmother's family).

There are plenty of wonderful photos in the set, but by far my favorite is this picture of Emma Mathilde Rathke Pownall (Pete's great-grandmother) holding her daughter, Judith Jean (Pete's great-aunt). Judy was born in November of 1915 and her mother died in March of 1919 while giving birth to Pete's grandmother, Amy. In this photo, Judy is almost 2 years old, Emma is not visibly pregnant, and they are outside without coats, so I think it was taken in the late summer/early autumn of 1917.

We have boxes and boxes of studio photographs of this generation, but few candids. Though this picture is posed, you can't pose the smile on Judy's face. It's tragic that these two little girls grew up without a mother and heartbreaking to find a photo of their happiness before it was shattered. Still, it is a lovely photograph and I will be making a copy for myself, even though I'm only associated with them by marriage. 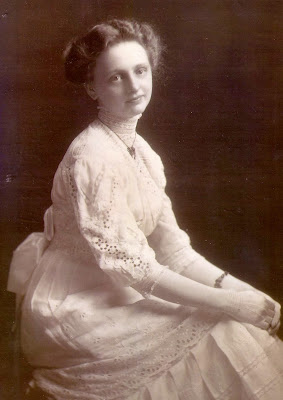 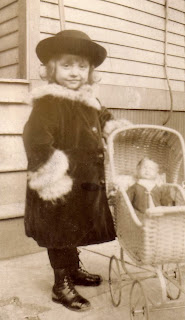 In a good hat! Posted by Caitlin GD Hopkins at 10:17 AM