Cheery Reading of the Day

I am currently doing some background research for an undergraduate course on the history of life and death issues. This project brings a whole host of light reading across my desk: 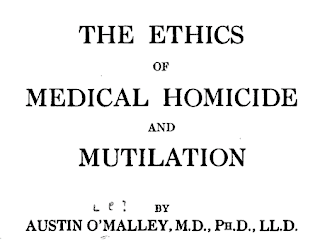 I've spent all afternoon reading Catholic obstetrical textbooks from the early 20th century. I'm learning all sorts of things that I never learned in CCD.

For example, according to a decree of the Holy Office (March 5, 1902), "the extraction of an ectopic fetus before the age of viability is unlawful." At first, it seems a straightforward rule, but I have to wonder — is an ectopic fetus ever viable? I have heard of an extraordinary case here or there, but, in general, ectopic pregnancies are not viable. If you sit around waiting for them to become viable, you will most likely get a dead mother as well as a dead baby.

Another nugget from Rev. Edward F. Burke's Acute Cases in Moral Medicine (a textbook for Catholic nurses, 1922): if a newborn seems likely to die, it should be baptised immediately by a priest. If no priest is available, a lay cleric should do it. If no lay cleric is available, a man should perform the ceremony. If you're really desperate, a woman can baptise the child, but only as a last resort. There is also a long, explicit section on the baptism of conjoined twins.

If a baby born to non-Catholic parents seems likely to die, it can be "baptized even against the will of the parents." The textbook recommends that the Catholic nurse perform the ceremony in a whisper.


There's a lot more. I find these texts fascinating because they occupy a moral universe in which the wishes of the patient have no bearing on the course of the doctor's or nurse's actions.
Posted by Caitlin GD Hopkins at 4:46 PM

Indeed, interesting. I recently read, and haven't confirmed, that prior to 1850 or so it was wrong for Catholics to perform a c-section, because the mother was so likely to die, and her life trumped the fetus. Interesting reversal.

Absolutely. O'Malley has a whole section on caesarian deliveries and and cites mortality rates well over 50%. He was writing in 1919, but cautioned against c-sections in all but the best hospitals: "The ordinary practitioner, however, is utterly unfitted to do a cesarian section of any kind."

He doesn't agree that the life of the mother trumps the life of the fetus, though. He finds them totally equal, to the point that the Catholic physician is never permitted to directly kill the fetus in an effort to save the mother's life, even in a case of ectopic pregnancy.

Oops, I meant to include a link to that quote.