While perusing the Plymouth epitaphs, I found several gravestones dedicated to women who outlived their husbands by several decades. I suppose many towns may have had elderly widows, but I can't help but wonder whether the combination of men dying young and women never remarrying is more common in maritime communities. I won't be able to answer that comparative question until I have documented several other cemeteries, but I can look at a few examples of Plymouth's long-term widows: 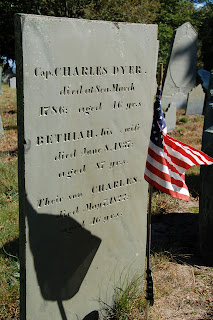 Bethiah Dyer, wife of Captain Charles Dyer, died in 1837 at age 87. She outlived her husband by 51 years. In the 1790 census, Bethiah Dyer is listed as the head of a household that included one man over the age of 16, one boy under 16, and 7 girls and women. 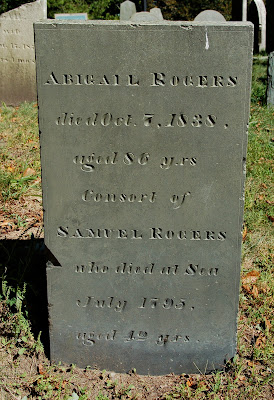 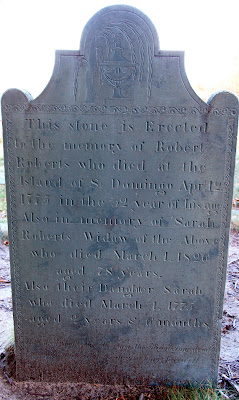 Sarah Roberts, wife of Robert Roberts, died in 1826 at age 78. She outlived her husband by 51 years. In 1790, her household included one free, white male under 16 and two white women.
Posted by Caitlin GD Hopkins at 7:55 AM