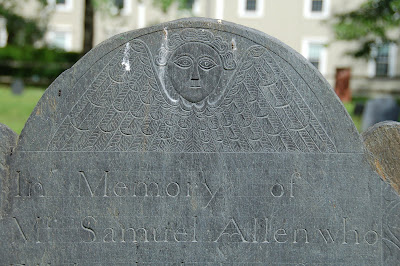 On August 25, 1746, Samuel Allen took his children, Samuel (8), Caleb (9), and Eunice (13) into a field to help with the haying. They were accompanied by Oliver (18) and Simeon Amsden (9), Eleazer Hawks (29, Samuel Allen's brother-in-law) and two soldiers named Adonijah Gillett and John Saddler.

Most haying parties in Massachusetts did not need armed guards, but this group knew that they lived a precarious existence. Deerfield, at the far reaches of English settlement, had been attacked by Native Americans and the French many times over the past five decades. With the advent of King George's War in 1744, the colonists in Deerfield went on heightened alert. Though their presence in Deerfield was an aggressive act of encroachment on Indian land, the colonists there considered their military efforts defensive.

As the Allen family and their companions approached the hay field, they were unaware that they were observed. Five days earlier, an allied army of French and Indians had overwhelmed the tiny garrison at Fort Massachusetts, 30 miles from Deerfield. News of the attack had not reached Deerfield, but a group of about 60 Native Americans had. A 19th-century history of Deerfield speculates that this group wanted more captives than they had taken at Fort Massachusetts. Noticing that the hay was ripe, the detachment deployed in the woods around the hayfield and waited for the inevitable haying party.

When the Allen family reached the hayfield, Samuel and his children began cutting hay while Eleazer Hawkes went in search of partridge. Accounts differ slightly as to what happened next — Hawkes either stumbled upon a sentry or fired at a bird. Either way, he became separated from the group. Within minutes, the raiding party opened fire, killing Hawkes.

Startled by the gunfire, Allen, Gillett, and Saddler seized their weapons and urged the children to flee. They had little hope of turning back the raiders, but hoped to stall them long enough to allow the children to reach shelter.

They were not successful. The Indians easily overpowered Allen and Gillett, killing them both within minutes. Saddler turned and ran, plunging into the river. He survived.

Meanwhile, the raiding party split into small groups in order to pursue the children. If their primary objective was the taking of captives, they went about it in a strange way. Perhaps it might have made sense to kill Oliver Amsden, who, at 18, may have resisted. But why kill 9-year-old Simeon? Wouldn't he have made an ideal captive? Why attempt to kill 13-year-old Eunice with a hatchet blow to the head? Of the four children present, the raiders captured only 8-year-old Samuel.

I remain unconvinced that taking captives was priority #1.

Caleb Allen, age 8, hid in a cornfield and escaped without injury. Eunice recovered from her grievous wound and lived to be 80 years old.

In later years, this raid became known as the Bars Fight. Deerfield residents remember it as the last major incursion by Indian forces. I don't know how Native Americans remember it. The rest of us know it as the subject of the oldest surviving literary work by an African-American author.

Lucy Terry Prince, a slave living in Deerfield, wrote "The Bars Fight" soon after the event. The poem circulated in manuscript form and oral culture until it was published in 1855:


August, 'twas the twenty-fifth,
Seventeen houndred forty-six,
The Indians did in ambush lay,
Some very valiant men to slay.
'Twas nigh unto Sam Dickinson's mill,
The Indians there five men did kill.
The names of whom I'll not leave out,
Samuel Allen like a hero foute,
And though he was so brave and bold,
His face no more shall we behold.
Eleazer Hawks was killed outright,
Before he had time to fight,
Before he did the Indians see,
Was shot and killed immediately.
Oliver Amsden he was slain,
Which caused his friends much grief pain.
Simeon Amsden they found dead
Not many rods from Oliver's head.
Adonijah Gillett, we do hear,
Did lose his life which was so dear,
John Sadler fled across the water,
And thus escaped the dreadful slaughter.
Eunice Allen see the Indians comeing
And hoped to save herself by running;
And had not her petticoats stopt her,
The awful creatures had not cotched her,
Nor tommyhawked her on the head,
And left her on the ground for dead.
Young Samuel Allen, Oh! lack-a-day!
Was taken and carried to Canada.
Samuel Allen is buried in Old Deerfield Cemetery under a headstone carved by John Locke. His epitaph reads,

In Memory of
Mr. Samuel Allen who
Fell by the Indian Savages
August ye 25th 1746
Valliantly Defending his
Own Life & Childrens in
ye 45th Year of his Age.
Listen to me ye Mortal men Beware,
That you engage no more in direfull
War By means of War my Soul from
Earth is fled. My Body Logd in
Mansions of the Dead. 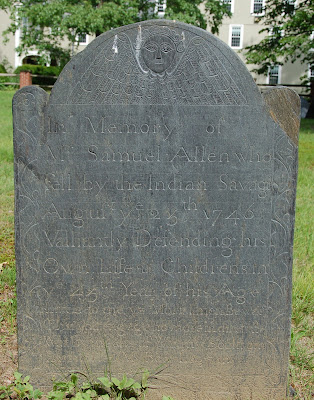 Samuel Allen was a brave man and I admire the sacrifice he made for his children. At the same time, I can't help but think that he was not a blameless victim. Haying a field might seem like a blameless act — most accounts of the Bars Fight certainly play up the pastoral aspects of the scene — but the larger context is murkier. I've been reading Patricia Limerick's The Legacy of Conquest: The Unbroken Past of the American West, and her chapter on settlers' disingenuous claims of victimhood has stayed with me. They moved to a desert and complained that there was no water. They planted non-native wheat on the plains and complained about the locusts. They seized land that was already in use and complained when the inhabitants defended their own claims. At all times, the Anglo-American colonists considered themselves blameless victims.
Posted by Caitlin GD Hopkins at 4:38 PM

The Indians of the party would have likely been Mohawks from the St. Lawrence Valley, working with/for the French. A number of the New England children who were "carried to Canada" were raised as Mohawks and have descendants in the Mohawk communities of northern New York and adjacent Canada. A common Mohawk name in that area is Tarbell -- all of them descendants of two Tarbell boys taken from Groton in 1707.

Yes, he survived. He was redeemed a year later, though the account I read said that even after a year, he was reluctant to come back.

Descendant Thomas Allen Dickerson says,
Yes, He did survive and was "redeemed" 2 years later when his Uncle, who was also captured at the surrender of Fort Massachusetts which He commanded(Mother's Brother), found Him At a French Fort in Canada, while negotiating a prisoner exchange. No, he didn't want to come back but through the help of his "adopted" Native American Grandmother was pointed out to his Uncle. Later Fought in Revolutionary War, Rank of Lieutenant, Was know as "Barefoot Allen" for not liking shoes. Tried to fight in war of 1812 @ age of 76 and is buried in the Allen/Hog cemetery on south end of Grand Isle, Lake Champlain. Ethan and Ira Allen were Uncles.

Tom -
I have been researching "Barefoot Allen" who is said, in the Ashfield, MA town history, to have owned property in South Ashfield. In fact, he may have once owned the house I have purchased on Creamery Rd. The history says he was active in Shay's Rebellion. Is this your ancestor?
Tamsen

In the Ashfield, MA town history, it is said that "Barefoot Allen" lived for a while in South Ashfield and participated as a leader in Shay's Rebellion. Is this your ancestor? I would be interested to know as may have purchased his old cape on Creamery Road.
RSVP.

Tamsen,
Some corrections and additions to my last post.
1)Lieutenant Samuel Allen is not buried in the Hoag Cemetery on Allen Road, Grand Isle, as I had stated. The headstone there is for his son, Samuel. It is not known where or if he has a marker.
2)I believe young Samuel scouted for his uncle/rescuer John Hawks pre 1758, definately for Capt. Samuel Wells in 1759, on then western frontier.
3)Was at Battles of Long Island, Fort Stanwix, Bemis Heights and at Valley Forge winter of 1777-1778.
4)Was involved in Shay's Rebellion 1786-1787, led a Company, did not accept the amnesty, never recanted and lived in Ashfield, Mass during this period w/ family. Might have moved to Tinmouth, VT to escape this trouble before moving family all to Grand Isle, Vt 1794.
5) Ethan and Ira were cousins.

I would like any information you may have on this ancestor of mine, period pictures of house, etc.

He was one of many children who served at Valley Forge and in the Continental Army; with child soldiering being well documented.

Here is more data on the Samuel Wells at Valley Forge.

Left Valley Forge in June 1778 as part of Lee’s Division.