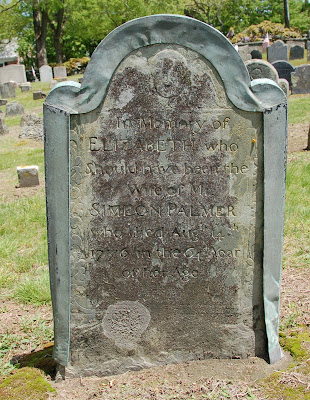 One of the most tragic (and most intriguing) gravestones in Little Compton, RI belongs to a woman named Elizabeth Mortimer who died in 1776. Her epitaph hints at a frustrated love affair that Elizabeth (or whoever erected the stone) regretted for many years:


In Memory of
ELIZABETH who
Should have been the
Wife of Mr.
SIMEON PALMER
who died Augst. 14th
1776 in the 64th Year
of her Age.
To make matters worse, Elizabeth's gravestone stands next to a stone dedicated to Lidia Palmer (d.1754), who was the wife of Simeon Palmer. Simeon may be buried nearby, but his grave is not marked. 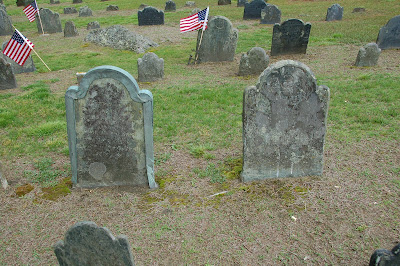 The strange thing is that some sources indicate that Elizabeth Mortimer actually did marry Simeon Palmer. The bicentennial history of Little Compton's First Congregational Church says that Elizabeth and Simeon were married on September 5, 1755.

So what on earth is that epitaph supposed to mean? Even if Elizabeth and Simeon were in love/engaged before he married Lidia, why would it still matter in 1776, after Elizabeth and Simeon had been married for over 20 years? It seems a strange grudge to hold. Perhaps Simeon, who outlived both his wives, was responsible for the epitaph and used the opportunity to apologize to Elizabeth for wronging her.

The whole thing is very strange. Among other things that raise red flags, Elizabeth Mortimer was 11 years older than Simeon Palmer, which certainly isn't outside of the realm of possibility, but would be unusual. Since Simeon married Lidia in 1744, when he was 21 years old, it would mean that any preexisting relationship between Simeon and Elizabeth would be between a very young man and a woman in her 30s. Again, not impossible, but strange for 18th-century New England.

It's just one of those cases where I really wish I could have a 5-minute interview with those involved, just to find out what the heck was going on.
Posted by Caitlin GD Hopkins at 11:18 AM

Editor Newport Mercury: I read with much interest the account of the expedition of William Ellery Chapter, D. A. R., to Little Compton's old cemetery and regretted that I did not know of it of I might have tempted to go up and testify in behalf of Elizabeth. Twenty years ago this summer, I came first to Little Compton. I was much interested in this stone and made inquiries and also consulted the Town records. Aunt Sarah Charles Wilbur, the antiquarian of the village, and also Mrs. Angelina (Palmer) Griswold were then alive and they supplied the details that did not appear on the records of the Town.

The first church of Little Compton, R. I. was organized in 1704 under Rev. Richard Billings, a man of prominence and ability, much beloved, and exerted a strong influence over his charge. He had one idiosyncrasy, however; he firmly believed in cats as an article of diet, and fatted them for the purpose. Amongst his parishioners was a man, Simeon Palmer, of the fine old family resident in Little Compton. He was wealthy married first Lydia Dennis, Aug. 25, 1745, and had Susannah, Gideon, Humphrey, Sarah, Walter and Patience. At some time between 1745 and 1752 he had sunstroke which left him mildly insane and he adopted the views of his minister on cats and insisted on his family using them for food.

Lydia is represented as a mild spirited little woman and much against her wishes, complied with her lord's demands. Whether it had anything to do with his death or not I cannot say, but she died in 1753 and Simeon Palmer promptly courted and married Elizabeth Mortimer. Her parents were in humble circumstances, and the old ladies could not say whether she knew of his peculiarities. But they were certainly married as the record says: "Simeon Palmer and Elizabeth Mortimer, mar. by Rev. Jonathan Ellis Sept. 5, 1755." They had one child "Lydia, born Sept. 23, 1757," who married John Pearce. The record reads "John Pearce of James, dec'd and Sarah, and Lydia Palmer of Simeon and Elizabeth married by the Rev. Jonathan Ellis, Feb. 13, 1776." This family left town. After the birth of this child, Elizabeth rebelled against the cat diet, took her child and went home. The old ladies said he kept up her kindly interest in the old man and every Saturday evening he took his mending to her and she mended his clothes and gave him goodly advice. She was taken suddenly sick and died of a fever, and when the old people, her parents were told by Simeon Palmer that he would defray all expenses they gladly availed themselves of his offer. And there he put up this stone. No one put a stone at his grave however.

I often wonder if the descendants of the child Lydia have ever been back to see the stone and wonder over it. If the chapter should decide to repeat this trip I would be glad to know of it for I have a number of name of Revolutionary patriots whose graves are not marked.