I know that I already used "shot" as a verb back in part 54, but the circumstances described in that epitaph are so different from those described here that I feel justified in including both. 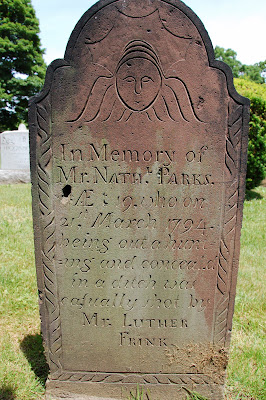 It seems a bit cruel to name the neighbor who accidentally shot Nathaniel Parks — it's not as if Frink murdered Parks in cold blood. Murder victims' gravestones often name the murderer as a public memorial/shaming, but I'm willing to bet that Frink felt bad enough without the constant, public reminder of his mistake.

Frink lived another 50 years and is buried in the same graveyard as Parks.