101 Ways, Part 89: "Laid His Hoary Head to Rest Beneath This Mournful Turf"

I've been to Newburyport many times, but I have never seen this stone. The folks over at A Very Grave Matter don't have a picture of it either, which leads me to believe that it may no longer exist. If that's true, it's too bad — it looks like a beauty. 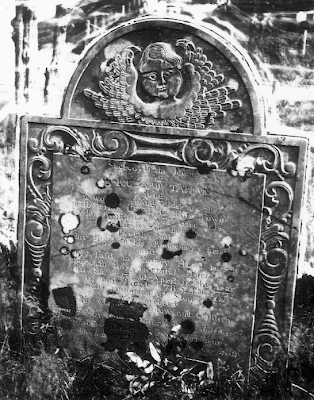 There are actually several ways to say "died" in this lengthy epitaph — take your pick.


Sacred to the Memory
of
MR. RICHARD TAPPAN,
long
a worthy ruling Elder of the
presbyterian Church, in this Town:
who finished a well tried Life,
of godliness and honesty,
sweetly took
his flight to his Redeemer's arms
and
gently laid his hoary Head to rest
beneath this mournful Turf
on the 27th of April in the Year
of our Lord 1785 AEtat .77.
this monumental Stone
was erected
by his weeping Widow and Children
[partially legible verse]
Posted by Caitlin GD Hopkins at 6:13 AM