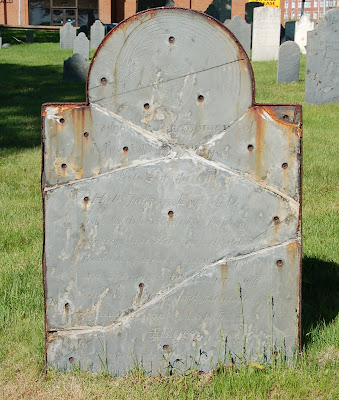 No, this gravestone is not riddled with bullet holes. It is merely a survivor of the well-intentioned efforts of a preservationist who never heard of the principle of reversibility. It's in rough shape, but I'm grateful to whoever preserved it long enough for me to add the epitaph to my list.


Sacred to the memory of
Mrs. Mary Jackson,
Relict of the late
Hall Jackson Esqr. M.D.
who with a comfortable hope of
entering into rest was released
from a long series of uncommon pain
and infirmity, which she bore with
singular patience and fortitude,
March 30thm 1805.
AEtat 62.