I haven't posted a book review in a while. This is not because I haven't been reading — I've been reading until my brain feels like mush in preparation for my upcoming oral exams. When I'm done with this mess, I'll need a full year of nothing but movies to reboot. 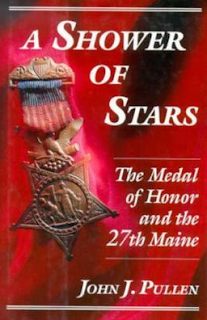 Among the more enjoyable books I've read in the past month is John J. Pullen's A Shower of Stars: The Medal of Honor and the 27th Maine (1967). I have some nostalgic affection for Pullen because my mother used to read to us from his The 20th Maine when we were children. A Shower of Stars is an entertaining read — the story of one cantankerous historian/journalist's quest to find out why the 27th Maine Volunteer Infantry was awarded 864 Medals of Honor and to track down the surviving medals.

The historical incident is interesting enough. In June of 1863, as the Army of the Potomac attempted to block Lee's advance into Northern territory, many of the 2-year enlistments were running out. Most of the men of the 27th Maine took their discharges and went home, but about 300 agreed to stay past the term of their enlistment in order to guard Washington, D.C. when the rest of the army left town to fight in Maryland and Pennsylvania. Secretary of War Stanton awarded these men Medals of Honor in recognition of their service, but, through a bureaucratic snafu, the medal was issued to all 864 soldiers on the muster rolls. When the medals were struck they were sent to the unit's colonel for distribution, but Colonel Wentworth felt that they had been awarded in error, so he never handed them out. A few men received their medals, but most stayed in boxes in Wenthworth's barn. In 1917, Congress rescinded most of the medals, but left the original 300 in limbo.

That's all well and good, but the real joy of reading A Shower of Stars comes from Pullen. He is a cranky, judgmental bastard and it's delicious. The first two times he assured his reader that little boys should be caned far more often than they typically are, I figured he was probably joking, but it just kept coming up.

Pullen's relentless Whiggishness deplores any historical incident that stands in the way of Progress. He is totally incapable of considering the Civil War-era Medal of Honor on its own terms — any deviation from its WWII incarnation as a combat medal awarded for extreme valor (often posthumously) is an "assault on the integrity of the Medal of Honor." Such travesties include the 27th Main's "shower of stars," along with the 29 medals awarded to Lincoln's funeral guard and Mary Walker's Medal of Honor. He reserves special contempt for Walker, whom he calls "a woman's rights zealot" who joined the army just to stir up trouble. Stanton is a "pernicious" idiot who never gives the Medal of Honor the respect it deserves. Of course, there was no reason for Stanton to adhere to WWII-era standards for awarding the medal, but historical thinking never gets in the way of Pullen's ranting.

Perhaps in other circumstances, I would have been annoyed by this, but I was so glad to be reading a book with personality that I just found it charming.