Gravestone of the Day: Henry Woods

ERECTED
in memory of
Gen. HENRY WOODS,
who died March 5th, 1804.
Aged 70 years.
He served his country in her contest for the
obtainment of freedom and independence and
has since sustained with honor several important
offices both civil and military. He was no less endear-
ed to his family and connections by his disposition
to disseminate kindness and promote the social
virtues than to the community by his public spirit
and charity.
See RJO's post mentioning Woods' involvement in Shays' Rebellion. 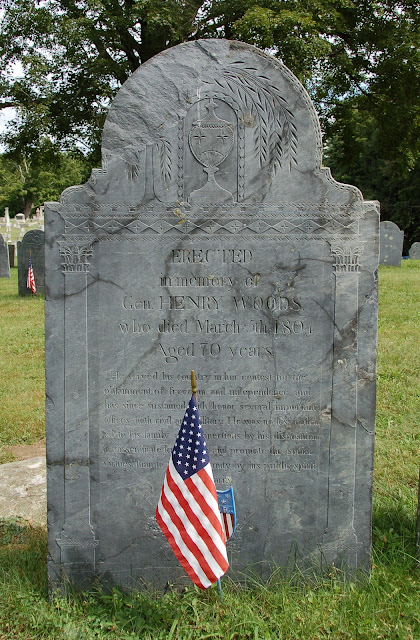 Posted by Caitlin GD Hopkins at 7:28 AM

What a wonderful description of his contribution. Fascinating stuff on the link too.

The first photo is a real beauty.

Gen. Woods (my 6th-great-uncle) was a government man in Shays' Rebellion, sent to arrest some of Shays' Middlesex men. Politically, he was very much on the losing side in that neighborhood. The governor who ordered the arrests was trounced in the next election and expelled from office, and when one of the people arrested was finally released his fellow citizens promptly re-elected him to town office as a minor hero.