Between 1704 and 1774, nearly 36,000 people were buried in Boston's three municipal graveyards (Copp's Hill, Granary, and King's Chapel). I started my count in 1704 because that is the first year in which the statistics were separated by race and I end in 1774 because the upheaval of the Siege of Boston in 1775 was a demographic catastrophe.

Of these, nearly 5,300 were black, though the records make no distinction between slave and free. Overall, about 15% of Bostonians buried in the city during that time were black, though the percentage goes as high as 23% in some years. Over the course of the 18th century, the percentage of blacks buried in these three graveyards dropped, though this was mainly due to an increase in white burials — the number of blacks buried stayed fairly constant: 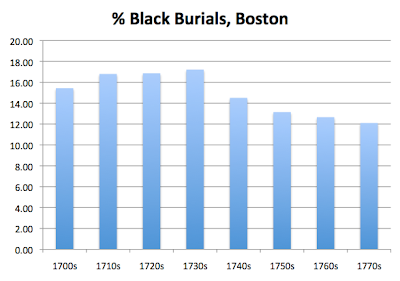