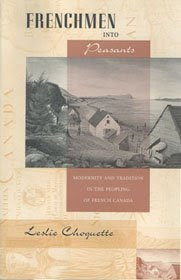 Earlier this week, I read Leslie Choquette's Frenchmen into Peasants: Modernity and Tradition in the Peopling of French Canada (1997). I don't know as much as I'd like to know about Canadian history, but, luckily, the professor who is examining me in early American history takes a very broad view of that field, so I was able to include this on my generals list.

Choquette’s in-depth demographic history of the colonists of New France challenges many of the origin stories cherished by their descendants. While French-Canadians often think of their ancestors as rustic peasants who emigrated from the French provinces, Choquette finds that migrants to French Canada were generally cosmopolitan and middle-class (many were artisans). Her title is a reversal of Eugen Weber’s seminal work, Peasants into Frenchmen (1976), which charts the consolidation of French nationalism in the late 19th century.

Frenchmen into Peasants is heavily influenced by social science methodology. Choquette’s argument is based on statistical analysis of 16,000 French migrants whose birthplaces, occupations, and migration patterns can be recovered because of a “mania for encyclopedic description” that characterized French imperial projects from the beginning of the 17th century (10). She does not present literary evidence (not even letters, diaries, etc.) or other forms of documentation to support her conclusions, which is too bad. As it is, this book reads like raw data. Choquette’s conclusions are plausible given her data, but without corroborating evidence in other forms, it is difficult to accept them wholeheartedly. She convinces the reader that French-Canadians were not peasants when they set sail from France, but her actual discussion of the peasant-ization process is feeble.

This book had no maps, which was a problem because so much of it was about regional origins and settlement patterns. Tsk, tsk, Harvard University Press.
Posted by Caitlin GD Hopkins at 8:51 PM