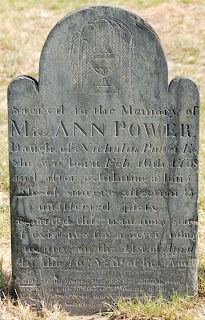 I have not abandoned 101 Ways to Say "Died"! I am still confident that I'll be able to find 101 unique expressions of the same idea — I just haven't been doing much graveyarding since winter set in. There are some great examples in James Blachowicz's From Slate to Marble and I'm anxious to track them down and get my own photos to post here.

I debated whether Ann Power's epitaph constituted a way to express 'died.' It bears a close resemblance to #11 and #6, with a little extra flourish on the end.

Sacred to the Memory of
Miss. ANN POWER,
Daugh. of Nicholas Power, Esq.
She was born Feb. 10th, 1738
and after exhibiting a long
Life of sincere affection &
unaffected piety,
departed this transitory state
of existence for a never ending
eternity, on the 21st of April
In the 76th Year of her Age.
Posted by Caitlin GD Hopkins at 4:51 PM

I found one this past weekend, that said something along the lines of this gentleman lived a industrious life until he got sick because of old age...of course it was worded a bit differently, but i found it funny!

As a minor but curious typographic point, it's interesting to note that the stone says

In American usage today we do write Mr. and Mrs. but we write Miss rather than Miss. (even though they are all abbreviations). It must have been standard practice once upon a time to write Miss., but the full-stop was lost there even though it was retained for Mr. and Mrs.

I missed that in my transcription, but I'll fix it right away.