Close, But Not Quite

This week, Andrew Sullivan published a 19th-century photo (c. 1870s) submitted by a reader who claimed that it depicts "a would-be transsexual." The person in question (far left) has not been positively identified, but he/she has short hair and the photo is labeled, "Howard." 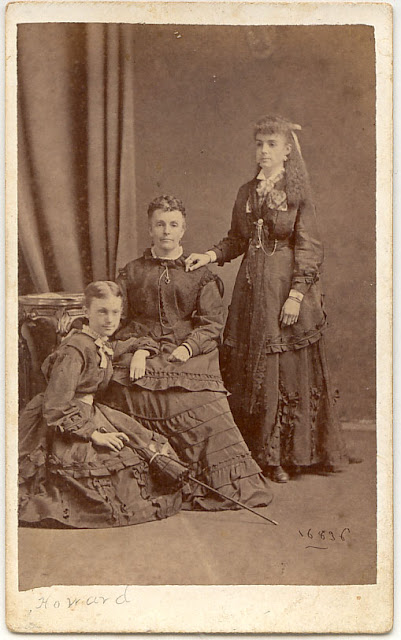 Another reader wrote in to make the eminently reasonable point that we should not jump to conclusions when we view historical materials with 21st-century eyes:


Sometimes viewing things through a 21st century lens can be very misleading. I think there is a pretty good chance this young man is just a late bloomer and not a transsexual.  Most noticeably, he does not appear to be making any attempt to actually look like a girl.  He's just in a dress.  Of course I may be wrong, as I'm not an expert on the history of the practice of breeching, but I remember seeing pictures of my grandfather in a dress when he was at least five or six and nobody assumed he was a transsexual.

Close, but not quite.

First, dresses were for children — boys were breeched when they were kindergarten age. The person in the photo is an adolescent, not a child. Victorian boys sometimes wore military-style tunics over blousy pants until age 10 or 12, but this person is wearing an adolescent girl's dress.

Second, the reader is wrong when he/she says that there is no "attempt to actually look like a girl." As we've seen before, hair parted in the center is a strong indicator that the subject is female. The other adolescent in this picture has a more cutting-edge hairstyle: bangs. The prop, a parasol, is also a strong signifier of femininity.

The second reader makes a good point about the conclusions drawn by the first, but his/her supporting evidence falls short. Still, I am inclined to be skeptical about the possibility that the photo depicts a young boy. The original poster just makes too many assumptions. For instance, the person on the left looks like a boy to us because he/she has short hair. Yet, Victorian girls sometimes sported brutally short haircuts, particularly when they were recovering from serious illnesses. When you hear hoofbeats, think horses, not zebras.

Could this be a photo of a boy in a dress? Sure. But I wouldn't bet on it.
Posted by Caitlin GD Hopkins at 7:42 PM

To me, it just looks like a not-attractive and slightly overeight Mom and two daughters. The "Howard" label could be a surname.