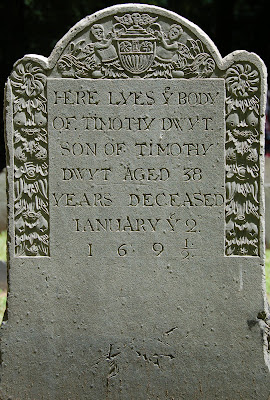 Yesterday, I found several examples of subterranean carving on stones at the Granary Burying Ground in Boston.

Sometimes, colonial American gravestone carvers practiced designs or letters on the ballast part of the stone. These carvings were not meant to be seen — they were made on the part of the stone that was supposed to be hidden underground. Over the years, stones get moved or soil washes away, exposing these informal markings.

There are plenty of examples of recent graffiti in old graveyards, but these are not among them. A teenage might carve initials or symbols into a stone, but probably wouldn't bother with the neat Roman "I" on the base of the Timothy Dwyt stone (1691/2). The letter is the same height and depth as the other "I"s in the epitaph. Perhaps the letterer was trying out a new technique or a new tool. Click on the image at right to see a larger version. 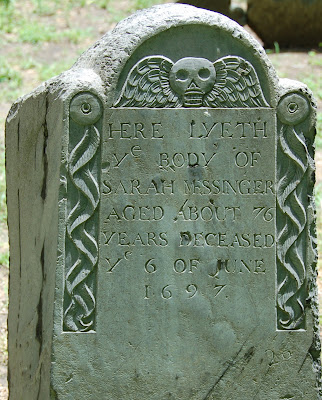 To the immediate right of the Timothy Dwyt stone is the less elaborate Sarah Messinger stone (1697).

Just below the right border column, you can see a clearly inscribed "26." Unlike the "I" on the Dwyt stone, which is located far below the epitaph at a careless angle, the carving on the Messinger stone is located just below what should be ground level and seems to be carved at a more purposeful angle.

I can't be sure, but I wouldn't be surprised if the "26" on this stone is some sort of price or inventory number. I've talked about pre-decorated stones before. If this stone were part of a large prepared inventory, the carver might have marked it in order to keep track of it in the shop. The number "2" does not appear anywhere else on the stone, which seems to indicate that these carvings may not have been for practice. 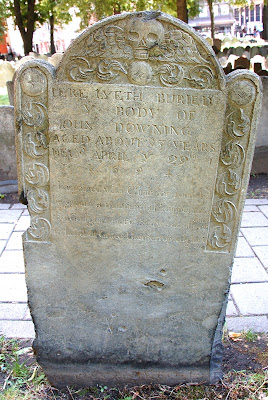 The best example of subterranean practice carving comes from the John Downing stone (1694). Unfortunately, this stone is in a very shady spot, so I was not able to get a very good picture of it — if you click on it, it should become a lot clearer.

Look all the way at the bottom and you will see two rows of carved letters. It is doubtful that the same hand carved both these letters and the epitaph: the latter is expertly inscribed by a skilled and steady hand while the former look like they were gouged into the stone by a novice.

These letters do not appear to spell anything. As best as I can make them out, they read, "H K NE RP E R P E RA" with an H and some Es and Rs in the second row. These tentative letters are separated by random, uneven spaces and at least one gouged-out area where an unacceptable attempt has been removed. The novice seems to have been practicing letters with strong uprights. Faint ruled lines show that he was also learning to follow guidelines to make letters of the correct height.

I don't know why the master would allow an apprentice to practice on a finished gravestone rather than on scraps. My only guess is that finishing stone was expensive and that it was more cost effective to let the novice practice on the ballast part of a finished stone rather than finish stones specifically for practice.
Posted by Caitlin GD Hopkins at 2:39 PM