One of the interesting things about Brooklyn, CT's South Cemetery is the large number of gravestone carvers whose work is displayed there. In nearby Lebanon, Windham, and
Columbia, graveyards are dominated by the carvings of Obadiah Wheeler, the Manning family, and the Collins family, with the odd Gershom Barlett or John Hartshorn thrown in.

In contrast, the Brooklyn cemetery contains the work of at least a dozen different carvers, many of whom are much better known for their work in Worcester, Boston, and Providence. I've been able to track down a few of their names, but most are unknown to me. I'll have to look through Markers for some more clues. This New York Times article may also help. If anyone knows these carvers or has seen similar work, please leave your leads in the comments! 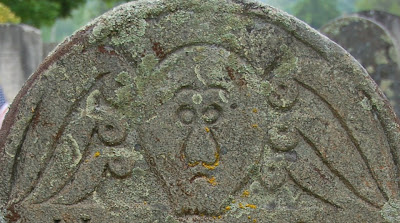 Gershom Barlett:
Gershom Barlett (a.k.a. the "hook-and-eyeman" or the "bulbous nose carver") is well known to residents of eastern CT. That is, he's well known to crazy residents of eastern CT. There are two Barlett stones in Brooklyn — one for Israel Putnam's son Daniel (1758) and a large double stone for his wife Hannah and daughter Elizabeth, both of whom died in 1765. 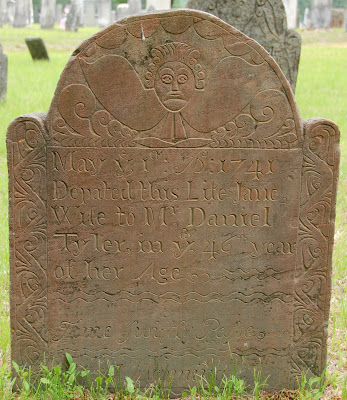 Manning's carvings are much more common in northeastern Connecticut than are Barlett's. His work on the Jane Tyler stone (1741) is notable for several reasons: it is in excellent condition, it is the earliest stone (that I have found so far) in this cemetery, it has the delightful misspelling "depated," and it is signed by Mr. Manning himself. There are about a dozen Manning stones in this cemetery, though I am not expert enough to tell which were carved by Josiah and which by his sons, Rockwell and Frederick, or others in their workshop. Since Frederick was born in 1758 and Rockwell in 1760, we might attribute the Tyler stone to Josiah even if it were not signed, but stones are often backdated. It is somewhat unlikely that Josiah Manning carved this stone in 1741, as he was only 16 at the time. 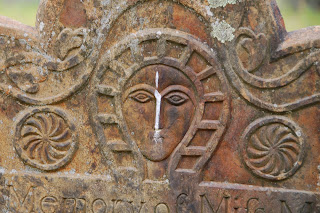 These are beautiful stones, unlike anything in Windham or Lebanon. At first, I wasn't sure that these were Sikes family stones, since Ludwig describes their territory as a quadrangle stretching from Northampton, MA to New Salem, MA, to Leicester, MA, to Mansfield Ctr, CT, and Brooklyn does not fall withing that area. However, James Slater, author of The Colonial Burying Grounds of Eastern Connecticut and the Men Who Made Them is confident that these are Sikes stones, and I believe him. I don't have a copy of his book, but I should try to get my hands on it. Harvard doesn't have a copy and $65 on Amazon is a bit steep. 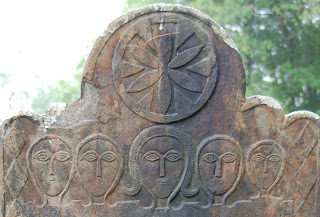 The Sikes stones in Brooklyn are wonderful. The faces are so striking and the whorls seem to be in motion. The Martha Phipps stone (1788 - above right) looks almost Egyptian. The striking tablet at left is devoted to the entire Peirce family: Capt. Benjamin Pierce (d. 1782), his wife, Hannah (d. 1736), his second wife, Naomi (d. 1757), his third wife, Sarah (d. 1759), and one of Hannah's sons, Rufus (d. 1741). These are only two among at least 10 Sikes stones in Brooklyn, and they are all beautiful, though their lack of mouths creeps me out a little. 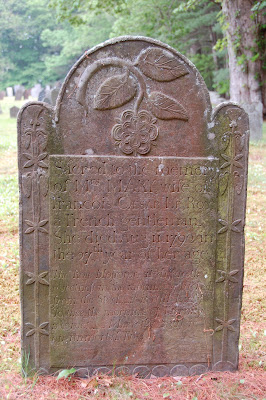 Perhaps the most notable Sikes stone in Brooklyn is the Mary LeRoy stone (1792). It features a lovely allegorical carving of a plucked rose and the epitaph,

The Rose blossoms — it diffuses sweetness in the morning;
plucked from the Stock, it is still lovely
To thee, the morning of Eternity is come!
Mary! thy Soul is an immortal Rose.

I can't help but wonder if that sounds better in French. The epitaph says that Mary was "the wife of Francois Caesar Le Roy a French gentleman," so it's likely that he helped decide on her epitaph. I haven't been able to find this poem elsewhere, and it sounds a little awkward in English, which leads me to suspect it may have originally been in French.

Unknown Carvers:
Here are the stones whose carvers I do not know. I'll post a pic and a few details for each. if you know one, let me know. I'll update this if I can ever find that Slater book. 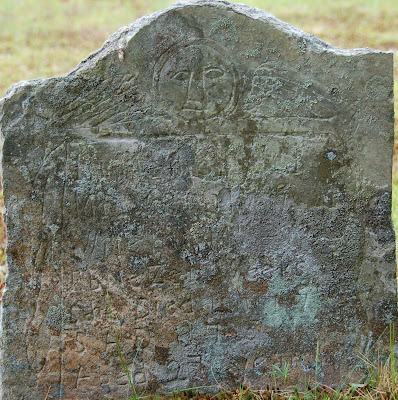 This is a small, rough-hewn stone with uneven letters (click to enlarge). It is barely readable, and the date may say 1734 or 1754. The round head and sloping wings are reminiscent of Collins' work, but the nose is much too wide and the face doesn't look like Collins. I can't read the name at the top, but I can make out the words "Wife," "Ebenezer Weeks," and "aged 27 years." This does not really look like the work of a skilled professional, which may make the carver difficult to identify. 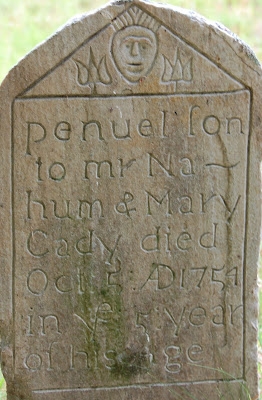 This little stone looks like another example of work by a local, non-professional carver. It reads, "penuel son to mr Nahum & Mary Cady died Oct 5 AD 1754 in ye 5 year of his age." I'm not sure what the material is — it's light, like marble, but it is clearly not very expensive. The carvings are simple but deeply inscribed. The face looks like it may have taken inspiration from Hartshorn's faces. I don't know what the little leaves around the face are, but they're a little disconcerting — they look like flames. 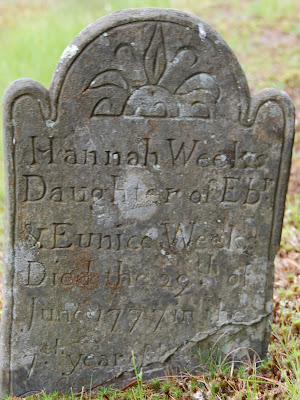 Yet another local, amateur carver. This stone reads, "Hannah Weeks Daughter of Ebr. & Eunice Weeks Died the 29th of June 1777 in the 7th year of." This stone is very close to the unreadable stone mentioned above, which means that that stone may belong to Eunice Weeks, but I can't be sure. The organic-looking carving on this lunette looks like an amateur version of the plant on the stone below.

This organic design is common in Providence's Old North Burying Ground. The only examples I have seen are on the gravestones of women, young children, and slaves. This example is no exception: it commemorates Septimus Tyler, who died in 1782 at the age of two. The Sukey Smith stone (1775) in Providence has an almost identical carving. John and Henry Harris (1776 and 1778) share a modified version of the design. 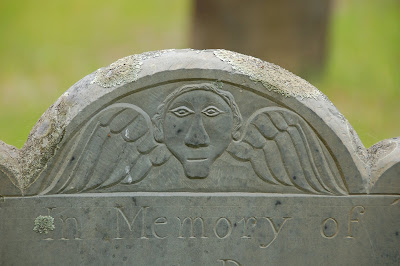 I have never seen the work of this carver before. He seems to be working in a Boston style on slate with fine carving. It is possible that I have seen him before but do not recognize his style because he may be attempting some form of portraiture. The stone is for "Abigail Perrin (of Roxbury)" who died in 1787 at age 15. If her family moved to Brooklyn from Roxbury, they may have sent back to Massachusetts for her stone, which might explain the Boston styling. 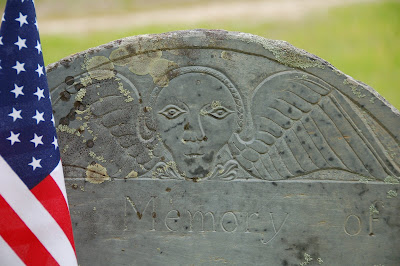 This stone may have been carved by the same person who made the Abigail Perrin stone (above). The eye capsules and wing patterns look similar, as does the possible attempt at portraiture. It honors Joseph Scarborough, who died in 1771 at age 55. The flag in the picture is part of a GAR star on the grave, but I have no idea why that was there, since he obviously did not fight in the Civil War. 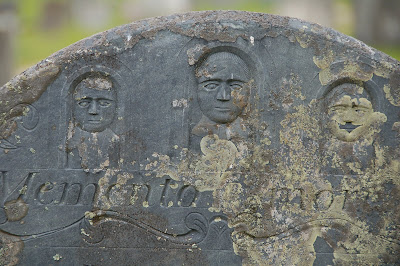 This baffles me. The carving work is so exquisite — it could have been made in Boston or Newport. This stone is for Ruth Taylor (d. 1778), who died four days after the birth of her twin sons, James, and John, neither of whom survived. Ruth's family may have been able to afford to send away for an expensive stone — her husband was the Hon. John Taylor, Esqr. and her father was John Huntington, Esqr.

UPDATE: These look like the work of John Ball of Hollis, NH. See Markers, 1985, “The Colburn Connections: Hollis New Hampshire, Stonecarvers, 1780-1820.” Similar stones can be found in Ipswich and Newburyport, MA. 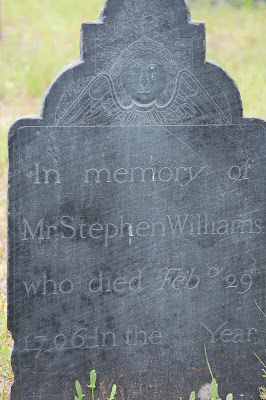 There are several of these small, lightly-etched slate stones in Brooklyn. This one is for Stephen Williams (1796). Similar stones bear 1797, 1786, and 1782 dates. These carvings are very delicate.

UPDATE: I am fairly certain that these are the work of Beza Soule. 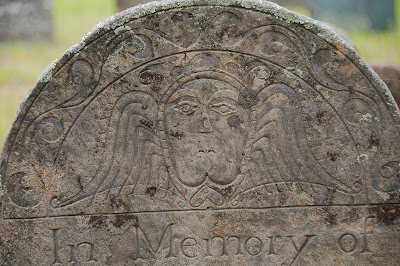 This one is a mystery too. Look at that chin! This is the Tomas Williams stone (1778). The Elizabeth Downing stone (1780) is similarly chin-tastic. 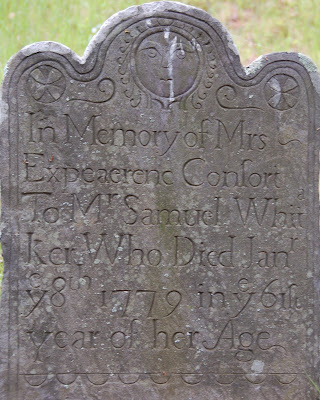 I think that the cleft-chin carver may be either Richard or Lebbeus Kimball. There are some pictures of similar faces in the 1980 edition of Markers in an article called, “'And the Men Who Made Them': The Signed Gravestones of New England"
by Sue Kelly and Anne Williams.


This is the Expeaerenc Whitaker stone (1779). I think they were going for "Experience." The lines on this one remind me of the Thomas Williams stone, but the face shape is entirely different. The eyebrows are similar, though, as are the swirly shapes flanking the face. 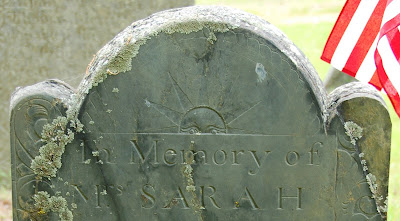 The sunrise/sunset theme is common in Rhode Island. Actually, "common" is probably overstating things a bit — they exist, and I've never seen one in Connecticut before. There are two little sunrise stones in Brooklyn: the Sarah Tyler stone (1781) and the Betsy Weaver stone (1785).

I just came across your wonderful gravestone posts. I have bookmarked them and will return regularly for careful reading.

The 1771 Joseph Scarborough stone is certainly the early work of John Dwight of Shirley, one of the most prolific carvers of east/central Massachusetts from the 1770s through the early 1800s. He bridges the winged-head to neo-classical transition. The previous Abigail Perrin stone may be his, but the face is a bit odd; I'd have to see more of the stone to tell.

I'd suggest that the 1778 Ruth Taylor stone is more likely a product of the William Park workshop in Groton. He was very prolific in east/central Mass. also; his work is a bit more in-the-round than Ball (although I know Park's work much better than Ball's).

Here's a page with some of Park's work (none quite match your stone; he was quite variable), and an early John Dwight stone that's a good match for yours:

This is great info. Thanks so much!

I agree that the Scarborough stone looks very much like the Hannah Stickney stone in Fitchburg.

I'm going to post some larger pics of that stone as well as two in Pomfret, CT that I think were carved by the same person.

After I identify this carver definitively, my next question is why so many stones from Massachusetts carvers ended up in Brooklyn, CT. There are so many carvers native to eastern CT, but the Brooklyn cemetery looks very different from the other local cemeteries.

Inspired by your site, I've been visiting graveyards in CT over the past week. At the Old Willington Cemetery, ten minutes from the university, I saw and photographed Beza Soule's gravestone. It reads, "Beza Soule Jr, died Oct. 9th, 1825, Aged 43 years. Underneath is has an engraving of engraving tools along with the statement, "What is your life?" I don't know if this is the man of whom you speak or if it is his son. Just thought you might be interested.