What a Difference the Sun Makes

It was sweltering in Cambridge yesterday, so I took a drive up the coast instead of broiling at home. I started in Newburyport and noodled back down to Boston, stopping at every old graveyard I came across. The colonial graveyards on the North Shore are among the best documented (after the big three in Boston) and I was able to see some famous stones, including several by the Ipswich bird carver.*

The graveyards in Newbury, Newburyport, and Ipswich have one unfortunate feature: trees. These burying grounds were active through the 19th century and it seems that caretakers made some efforts at garden landscaping, such as planting decorative trees. This made these graveyards nice to walk in, but murder for photography.

Colonial-era gravestones look stunning in raking sunlight, but it's tough to photograph them in the shade. What I really need is a 4'x4' mirror or some sort of external flash for taking photographs in shady graveyards.

To illustrate the problem, I took photos of sets similar stones where one was in the shade and the other received raking sunlight. 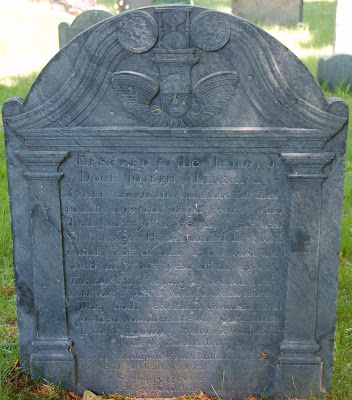 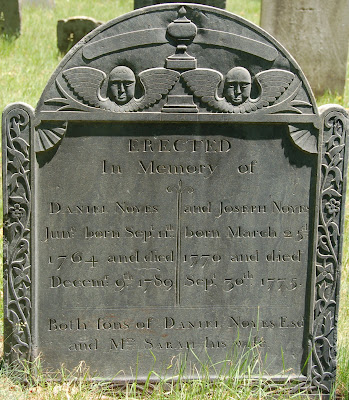 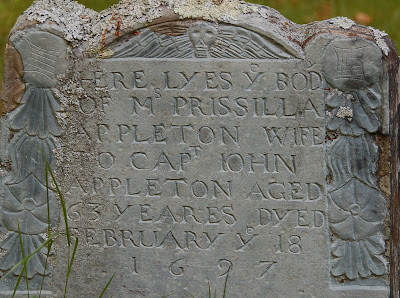 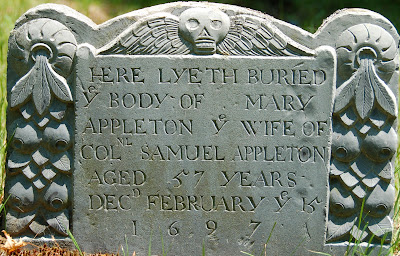 Side note: What kind of tragedy struck the extended Appleton family in mid-February of 1697?

All of these pictures were taken in the Ipswich burying ground within five minutes of one another. As you can see, shade makes slate stones appear flat and blue-ish, while sunlight raking across the face brings out every detail of the carving. This means that in order to get a great shot of a stone, you need to catch it at precisely the right time of day, which varies among graveyards and among stones in the same graveyard.

And you have to hope that no one planted any trees nearby.

* Who is the Ipswich bird carver? Actually, "he" is probably a series of carvers active in the Rowley/Ipswich area between 1680 and 1725. These carvers are known for "ornimorphic" or abstract, bird-like motifs. Often, the birds are located on either side of the soul effigy on the lunette and appear to be kissing over the top of the face. 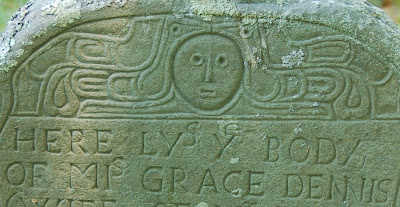 Following up my comment on your 7 June post, the 1779 Noyes stone shown here is also certainly the work of William Park's Groton workshop. Whether by William himself or one of his sons or apprentices I couldn't say, but the face, borders, and lettering are all in his style.