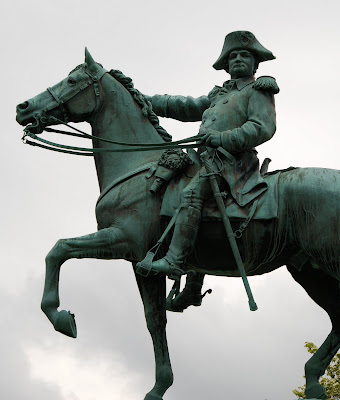 Another interesting thing about the cemetery in Brooklyn is that it was the original resting place of General Israel Putnam. Although he is not well remembered today, Putnam was quite famous in the eighteenth and nineteenth centuries. He never quite reached Daniel Boone or Johnny Appleseed status, but Putnam was a similar kind of folk hero: a bull-riding, wolf-slaying, escaped Indian captive who fought like a wildcat at Bunker Hill.

Few men ever encountered such a variety of dangers, or faced death in so many different forms. From the fierce she-wolf in her den — a story with which all boys are familiar; the burning powder-magazine at Fort Edward; the fiery torture at the stake; the tomahawk and the bullet of the concealed savage whose forest haunts he invaded; close and bloody contests with Indians and Frenchmen in the Old French War; at the Havana, fighting at the same time the Spaniard and the pestilence, which proved fatal to so many of his companions; and lastly at Bunker Hill and on other Revolutionary fields — a conspicuous target for British bullets. With the exception of the singeing he got at Fort Edward, and the cruelties inflicted on him while a prisoner, he escaped, as by a miracle, from all these manifold perils without a wound. 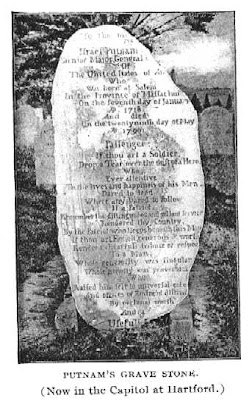 Putnam died in Brooklyn, CT in 1790. In the years after his death, so many people visited the little cemetery in Brooklyn to touch his gravestone that they wore the corners off of the tablet. In 1888, an elaborate equestrian statue of Putnam (designed by Karl Gerhardt) was erected about half a mile down the road and Putnam's body was re-interred underneath it. The damaged stone was moved to the Connecticut State Capitol. A replica now stands at the site of the original grave, and the equestrian bears the original epitaph.

I guess I'm so used to the Putnam statue, which is a stone's throw from my aunt's house, that I never realized how strange it is that such an impressive statue stands in such an undistinguished location. The statue is in front of the diminutive Brooklyn Historical Society on the side of a quiet road in a sleepy little town. The only reason anyone ever sees Brooklyn, CT is that Rte. 6 runs through the center of town, but "town" is a generous description. I say this with love — I got my marriage license at the (adorable) Brooklyn Town Hall. If you're ever in the area, stop by to visit General Putnam — it's pretty amazing to see such a gigantic, impressive statue in such a bucolic setting. 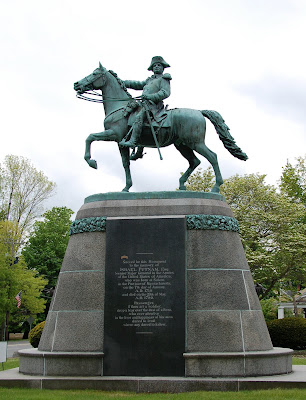 To the memory
Of
Israel Putnam, Esquire,
Senior Major General in the Armies
Of
The United States of America
Who
Was born at Salem
In the Province of Massachusetts
On the seventh day of January
A.D. 1718:
And died
On the twenty ninth day of May
A.D. 1790:
Passenger
If thou art a Soldier
Drop a Tear over the dust of a Hero
Who
Ever attentive
To the lives and happiness of his Men
Dared to lead
Where any Dared to follow; 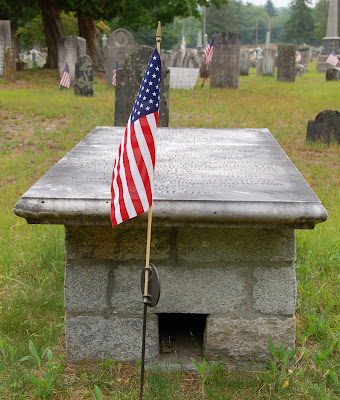 If a Patriot
Remember the distinguished and gallant services
Rendered thy Country
By the Patriot who sleeps beneath this Monument;
If thou art Honest, generous & worthy
Render a cheerful tribute of respect
To a Man
Whose generosity was singular
Whose honesty was proverbial
Who
Raised himself to universal esteem
And offices of Eminent distinction
By personal worth
And a
Useful life
Posted by Caitlin GD Hopkins at 7:10 PM