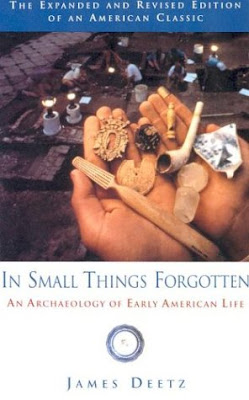 I'm packing up my books this week in preparation for a move next month. In the packing, I came across a book that is near and dear to my heart: In Small Things Forgotten: An Archaeology of Early America by James Deetz.

I received this book as a high school graduation gift from a family friend who is an archaeologist. At the time, I was planning on studying 19th-century America, and this book was my first nudge toward an earlier era.

In Small Things Forgotten is a light introduction to Deetz' work on the material culture of colonial New England. His historical argument is that colonial Americans forged new vernacular cultures out of Old World traditions and local conditions, but his larger point is that historical archaeology can offer substantial evidence of historical actors' "worldviews."

Deetz opposes the (now somewhat outdated) idea that either migration or transportation across the Atlantic was so traumatic that it erased any Old World cultural survivals. He finds substantial evidence that African-American material culture was substantially different from Anglo-American material culture in ways that cannot be explained by differences in wealth, supporting the idea that enslaved people retained aspects of West African culture well into the 19th century. These difference include a 12-foot rather than a 16-foot standard measurement, traditions of grave decoration, distinctive methods of building construction, and the survival of West African pottery forms. Unlike David Hackett Fischer, Deetz does not argue that colonial Americans transported their traditions wholesale. Rather, he argues for the creation of new vernacular cultures, more like Peter Wood's argument in Black Majority.

I love this book because it has something for everyone. It is written in a casual, accessible style that won't scare off a popular audience. The individual chapters offer primary evidence and gentle arguments in essay formats that are short and useful — perfect for high school or introductory undergrad reading assignments. Professional scholars with a background in material culture might not find much to chew on, but more traditional historians could benefit from an introduction to the possibilities of historical archaeology. All in all, more useful than many more "serious" tomes.
Posted by Caitlin GD Hopkins at 1:58 PM

I love this book too. Here's what I recently wrote for my colleagues. "How James Deetz Change My Life" - http://rootsandrambles.blogspot.com/2010/05/how-james-deetz-changed-my-life.html