The Cotton/Cooton/Cottton Family of Pomfret

Colonial American gravestones often bear interesting spellings of names (example: Expeaerenc Whitaker of Brooklyn, CT). I'm pretty used to this, but I am still surprised to find family groups with multiple spellings of a single surname. 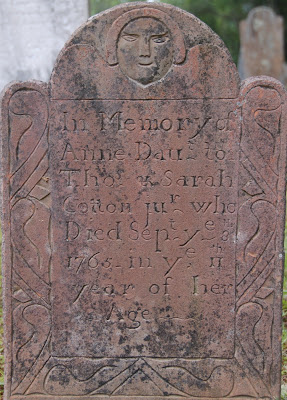 I ran across an example of this the other day in Pomfret with the Cotton/Cooton/Cootton/Cottton family.

In the late summer of 1765, some sort of illness struck the family of Thomas and Sarah Cotton, resulting in the deaths of at least five of their children: Chester (age 1) died on July 16, Owen (8) died on August 29, Anne (11) died on September 8, [J]ake (12) died on September 10, and Harvey (3) died on September 17. The children's stones stand in a sad little row in the old Pomfret burying ground. I was actually surprised to see that each child had his or her own stone, since children from the same family who died around the same time were often given common gravestones.

Although "Cotton" is the dominant spelling of the family's surname on these stones, several other variants also appear.

Eight-year-old Owen's gravestone states that he was the son of "Thoms. Cooton junr."

One-year-old Chester's gravestone displays the name as Cottton (the carver put "Cott" on one line and "ton" on the next), while his footstone spells the name "Cootton." 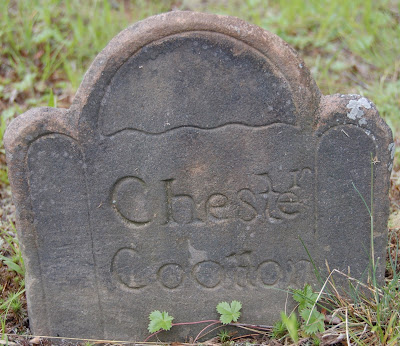 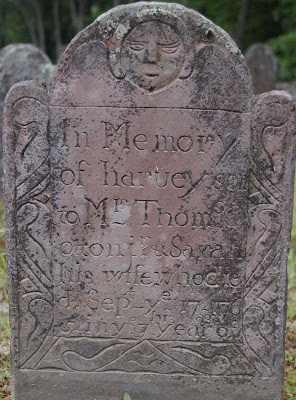 Since all of these stones were carved around the same time by the same carver, there is little reason to think that he was unaware of the dominant spelling. What can explain the variation? I can only conclude that the particular spelling was not all that important to the carver. The name was clear enough, so why bother to standardize the spelling? I don't think that the carver was incompetent (though his lettering, particularly on Harvey's stone, leaves something to be desired). I think that the spelling just didn't matter very much. If anyone has better ideas, I'd be eager to hear them.

There's another example of this with the Kinnicut/Kinicut/Kinnicutt family in Providence's North Burying Ground, but I don't have pictures of them yet. Perhaps I'll get down there later this week.
Posted by Caitlin GD Hopkins at 6:21 PM