I've been trying to track some of the language that I see on gravestones. Lately, I've found several examples of Death personified as the "King of Terrors." The phrase comes from Job 18:14 ("His confidence shall be rooted out of his tabernacle, and it shall bring him to the king of terrors."), in which Job's friend, Bildad, explains how God causes the wicked to suffer because they are guilty of sin.

According to Early English Books Online (EEBO), the earliest printed use of the phrase "King of Terrors" that is not a direct quote from the Book of Job appears in William Prynne's The Perpetuitie of a Regenerate Mans Estate . . . (1626).

After Prynne's use of the phrase, it appeared in about 200 other English books before 1700. The earliest example I can find in an American printed source is in James Fitch's Peace the End of the Perfect and Uprigh[t] . . . (1672). This was a funeral sermon preached after the death of Mrs. Anne Mason in Norwich (I'm assuming this means Norwich, CT, though it doesn't say):

When she was under the pangs of Death, and Nature could not be at rest, yet I speaking t her whether I should Pray once more with her? to which she readily answered yea, and durinall the time of the Prayer, lay as fully composed as at any time; that either the Lord at that time rebuked the pangs of death, and cauled the King of terrors to retreat his force, or else the Prince of peace would shew us that his peace when he pleaseth shall rule, and that in the Enemies Land, in the midst of the terrours of Death, and that she had to incounter with a Conquered Enemy.

Since this was a printed sermon, ministers may have been calling Death "the King of Terrors" in their pulpits for years before.

The phrase was certainly known to common New Englanders by the late eighteenth century. On September 2, 1767, Boston apprentice John Boyle wrote in his diary:

Died in the 18th year of her Age, Miss Mary Boucher, Daughter of the late Mr. Thomas Boucher, Merchant. A young Lady whose inoffensive and exemplary Behaviour very justly attracted the Love and Esteem of all those who had an acquaintance with her. Youth is no defence [sic] against the king of terrors. 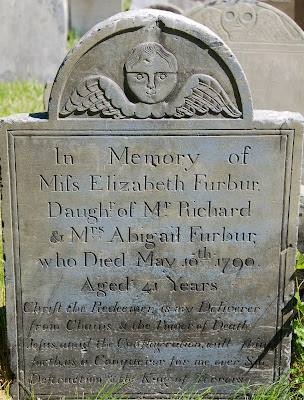 Yet, despite the many 17th-century references, I have not been able to find the phrase on any gravestone before the year 1790, and most of the examples I've found have been from the first decade of the 19th century.

The explanation for this lag may be simple: earlier stones' epitaphs are generally limited to name, date of death, age, and a few short details such as "Wife of xxx." In the late 18th and early 19th centuries, more stones began to bear poems, Bible verses, and laudatory epitaphs. Many of these are very common, such as "As I am now, so you will be, / Remember Death and follow me," "Remember me as you pass by, / As you are now, so once was I," and the ubiquitous "Blessed are the dead who die in the Lord." As epitaphs increased in length, there was more opportunity to include a reference to the "King of Terrors."

What is interesting to me as a student of material culture is that the length of epitaphs increased as the complexity of imagery on the stones decreased. Perhaps "complexity" is the wrong word to use here — I mean the theological significance of carvings and the number of symbols on each stone. At the same time we see explicit references to the "King of Terrors" in epitaphs, we see fewer images of death's heads, imps, scythes, coffins, and hour glasses.

For example, the William Dickson stone (1692) in Cambridge is rich in its imagery of death: imps carry coffins, demons hold darts and hour glasses, and a grinning death's head crowns the whole. The phrase "Memento Mori Fugit Hora" (Remember Death, Time Flies) is part of the lunette design, but the epitaph is fairly short: 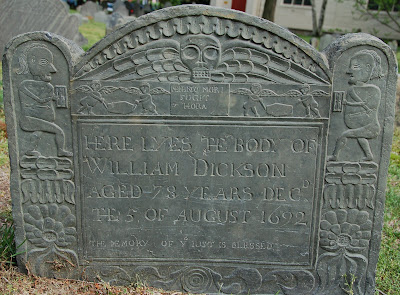 By 1800, epitaphs are a mile long and images have been reduced to plain urn-and-willow designs. I need to do more work on the periodization of these changes, but for now it seems to me that in the 17th century, carvers personified death through images and that over the course of the 18th century, words gradually took over this function. By 1800 or so, there were virtually no images of death on New England gravestones, but epitaphs were full of personifying language.
Posted by Caitlin GD Hopkins at 9:50 PM

In the Old Burying Ground in Arlington (once Menotomy, northwest precinct of Cambridge), there is a stone that is, I believe, from the late 1700s for a married woman named Susanna which omits the usual phrases and simply says, "Gone to the Summer land."

I've never seen anything like this for the time period!

Oooh, I'll have to go check that one out.

Watching a documentary about cholera the presenter said that this disease was known as the King of Terrors. This might account for why it started to appear on grave stones after the growth of large crowded cities.
Mike Stenhouse