Most of the Bible verses I've seen on 18th-century gravestones are from the Old Testament. Benjamin Goodwin's epitaph (Charlestown, MA, 1822) quotes the book of Acts 13:36, perhaps due to the influence of evangelical revivals in the early 19th century that placed more emphasis on the New Testament. Goodwin's epitaph also quotes Psalms 37:37, making it one of the most Bible-reliant epitaphs in the Phipps Street Cemetery. It also uses quotation marks, which is unusual:

Mr. BENJAMIN GOODWIN
"after he had served his own gen
eration, by the will of God, fell on
sleep, and was laid unto his fathers"
March 3, 1822,
AEt. 77
"Mark the perfect man, and behold
the upright for the end of that man
is peace." 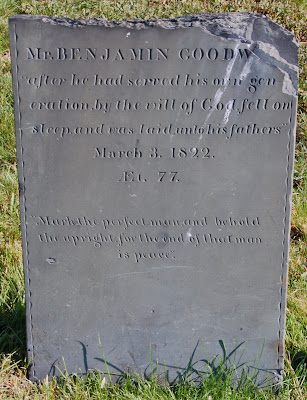 Posted by Caitlin GD Hopkins at 9:31 AM