On the day after Christmas in 1778, the brig General Arnold ran aground on a sand bar in Plymouth harbor. As freezing water flooded the lower decks, more than 100 crewmen were forced onto the deck, where more than 70 froze to death in a snowstorm that prevented rescuers from reaching their doomed vessel. Read all the gruesome details here.

Most of the dead were buried in a mass grave on burial hill, but a few were sent home to their families. Dr. Herbert Mann, age 21, was buried in North Attleborough, MA. His eloquent epitaph is quoted in Dickran and Ann Tashjian's Memorials for Children of Change: The Art of Early New England Stonecarving:


In Memory of
Doctor
HERBERT MANN
who with 119 sailors with Captn.
James Magee Master went on board
the Brigg General Arnold in Bos
ton harbour Decr. 25th 1778
hoisted sail and made for the sea,
& were immediately overtaken
by the most tremendous snow
storm with cold that was ever
known in the memory of man,
& unhappily parted their Cable in
Plymouth harbour in a place call'd
the cow-yard & he with about 100
others were frozen to Death, 66 of
which were buried in one Grave.
He was in the 21st Year of his age.
And now LORD GOD Almigh-
ty just & true are all thy ways,
but who can stand before thy cold?
I haven't been to North Attleborough yet, but I have a few pictures from the common grave in Plymouth: 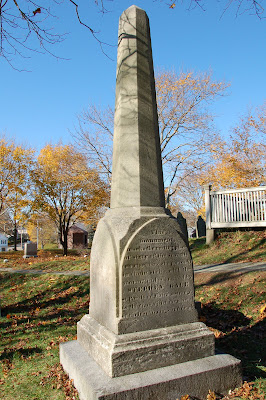 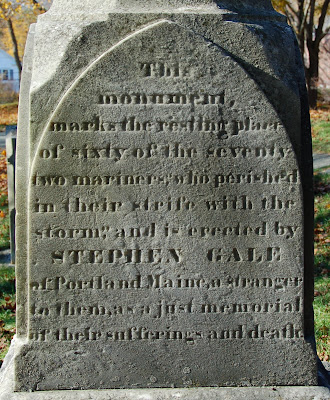 Posted by Caitlin GD Hopkins at 10:22 AM