I recently reread Drew Gilpin Faust's This Republic of Suffering: Death and the American Civil War and was more impressed than I was on my initial read last spring. She manages to keep the reader emotionally invested while still historicizing the emotions of her subjects, which is not an easy thing to do. The central point of the book— that Americans had to adjust their expectations for the "good death" in the face of the scale, location, and circumstances of death during the Civil War — is powerful and well argued.

When I was in Plymouth this weekend, I was thinking about Faust's work when I came across the gravestones of Joseph Churchill (d. 1836) and Thomas Russell (d. 1786). Faust argues that 19th-century Americans expected to die at home, surrounded by family and friends who would hear the dying person's last words and witness the state of his or her soul at the moment of death. If someone survived childhood diseases and accidents, he/she was expected to lead a long life and die a "good death," which is why the the Civil War was so disastrous for their understanding of death — thousands of men died all alone, away from home, with no witnesses, often with no identifiable remains. Faust argues that Americans had to improvise new ways of dealing with death when their expectations became untenable. 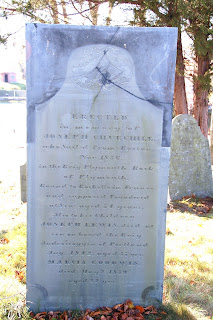 But what about people from Plymouth and other maritime communities? Surely they would not be shocked by the deaths of young men far from home. You can't turn around on Old Burial Hill in Plymouth without tripping over a cenotaph dedicated to someone who died in Cuba or Guadaloupe or off the coast of France. What were the expectations about death in these communities and did the Civil War have the same impact on them as it did in other places?

Faust maintains that uncertainty about a loved one's fate was one of the cruelest tortures for Civil War soldiers' families. The men and women and Plymouth had a long history of coping with uncertainty.

Joseph Churchill's epitaph is a good example. His family doesn't really know what happened to him — all they can do is "suppose":


ERECTED
in memory of
JOSEPH CHURCHILL,
who Sail'd from Boston
Nov, 1836,
in the Brig Plymouth Rock
of Plymouth,
Bound to Rochelle in France,
and supposed Foundered
at Sea aged 54 years.
Also his Children
JOSEPH LEWIS, died at
sea on board the Brig
Androscoggin of Portland
Aug. 1842, aged 37 yrs.
MARCIA GOODWIN,
died May 2, 1839,
aged 22 yrs.
Thomas Russell's family faced similar uncertainty:


In Memory of
Capt. James Russell who died
Sept. 28, 1792 aged 32 years.
And also Mr. Thomas Russell
supposed to be lost at Sea in a severe
Snow storm Decr. 4&5 1786
aged 24 years, both Sons of the late
____________
It seems unlikely that maritime communities' expectations of death could have been rattled as substantially as others' during the Civil War. They had a long history of uncertainty and cenotaphs. 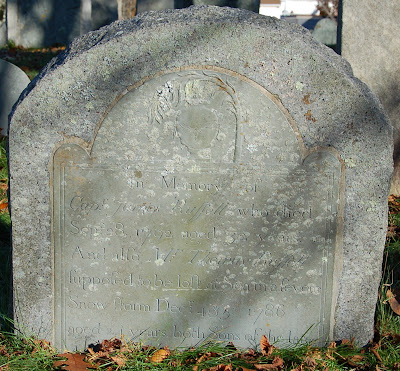 One note: It seems that when someone was lost at sea, the placing of a cenotaph relied on one of two things happening: 1) fellow seamen returning with positive knowledge of the death or 2) the death of another family member who required a gravestone. Many, many "lost at sea" cenotaphs are dedicated to more than one person. Usually, pre-1800 stones dedicated to more than one person are intended for spouses, young siblings, or mothers with infants, but cenotaphs are often inter-generational or commemorate adult siblings. Tragically, these are often similar to the Russell stone — dedicated to 2, 3, 4, or more brothers lost at sea.
Posted by Caitlin GD Hopkins at 5:25 PM

New Englanders (and other humans) had been dying far from home in wars for centuries. Although I haven't read Faust, I'm inclined to think that the Civil War differed in quantity but not necessarily in quality.

The maritime case is particular, however, and coastal communities always had the special problem of people being lost at sea. There's a famous meditation in Chapter 7 of Moby Dick:

=====
In the same New Bedford there stands a Whaleman's Chapel, and few are the moody fishermen, shortly bound for the Indian Ocean or Pacific, who fail to make a Sunday visit to the spot. I am sure that I did not.

Returning from my first morning stroll, I again sallied out upon this special errand. The sky had changed from clear, sunny cold, to driving sleet and mist. Wrapping myself in my shaggy jacket of the cloth called bearskin, I fought my way against the stubborn storm. Entering, I found a small scattered congregation of sailors, and sailors' wives and widows. A muffled silence reigned, only broken at times by the shrieks of the storm. Each silent worshipper seemed purposely sitting apart from the other, as if each silent grief were insular and incommunicable. The chaplain had not yet arrived; and there these silent islands of men and women sat steadfastly eyeing several marble tablets, with black borders, masoned into the wall on either side the pulpit. Three of them ran something like the following, but I do not pretend to quote:

SACRED TO THE MEMORY OF JOHN TALBOT, Who, at the age of eighteen, was lost overboard Near the Isle of Desolation, off Patagonia, November 1st, 1836. THIS TABLET Is erected to his Memory BY HIS SISTER.

SACRED TO THE MEMORY OF ROBERT LONG, WILLIS ELLERY, NATHAN COLEMAN, WALTER CANNY, SETH MACY, AND SAMUEL GLEIG, Forming one of the boats' crews OF THE SHIP ELIZA Who were towed out of sight by a Whale, On the Off-shore Ground in the PACIFIC, December 31st, 1839. THIS MARBLE Is here placed by their surviving SHIPMATES.

SACRED TO THE MEMORY OF The late CAPTAIN EZEKIEL HARDY, Who in the bows of his boat was killed by a Sperm Whale on the coast of Japan, August 3d, 1833. THIS TABLET Is erected to his Memory BY HIS WIDOW.

Oh! ye whose dead lie buried beneath the green grass; who standing among flowers can say-here, here lies my beloved; ye know not the desolation that broods in bosoms like these. What bitter blanks in those black-bordered marbles which cover no ashes! What despair in those immovable inscriptions! What deadly voids and unbidden infidelities in the lines that seem to gnaw upon all Faith, and refuse resurrections to the beings who have placelessly perished without a grave. As well might those tablets stand in the cave of Elephanta as here.
=====