Posting will be intermittent over the next few weeks as I am currently caught in the holiday/end-of-semester vortex and must direct every impulse to write toward strictly productive ends.

I've been reading an excellent study  of God's Little Acre by James C. Garman of Salve Regina University. It's called "Faithful and Loyal Servants: The Masking and Marking of Ethnicity in the Material Culture of Death," and was Garman's M.A. thesis at UMass. One of his analytic techniques is comparing the size of gravestones among several groups over time. I've created a graph using his measurements: 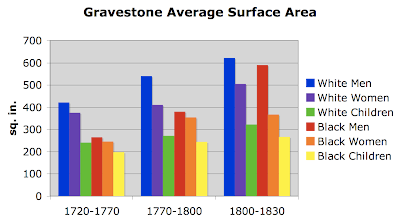 As you can see, in the earliest of the three periods, gravestones for white adults were similar in size, while enslaved adults' stones were about the same size as white children's. In the middle period, African American adults have slightly larger headstones than before, though that may be due to the practice of averaging larger stones for free people with smaller stones erected for slaves. By the final period, black men's gravestones are almost as large as white men's and the ratio of men:women:children is similar among both blacks and whites.

The one piece of data that is still a bit puzzling to me is the lack of growth in black women's stones between the second and the third period. Gravestones increased in size for all groups, but black women saw the least growth (3%) while black men saw the most (36%).

I think this probably has to do with the activities of the Free African Union Society, a mostly male organization which sponsored funerals (and perhaps gravestones) for its members. My main question about this data: What can gravestones tell us about how men and women in Newport might have experienced/expressed/understood freedom differently?
Posted by Caitlin GD Hopkins at 3:46 PM

Interesting graphs, but they show only the mean values. I would think the range would be vital in interpreting these data. One could easily imagine the range narrowing or widening according to economic conditions. It's easy to spot differences in social standing in old cemeteries by the size of the stones, even if the population is ethnically homogeneous.

And I wonder if surface area is the right measure. I suppose it is being used as a proxy for cost, which usually won't be known. But some early carvers charged by the letter (as monument engravers do to this day), so some combination of size and number of letters might be more accurate. (Height of the stone might be a natural measure also, but it's much less reliable because of uneven sinkage.)

Yes, Garman counts letters in the epitaphs, too - this is just a small subset of his data. He doesn't argue that size is precisely analogous to cost — after all, the John Stevens III stones in the African American section must have cost heaps more than some of the unadorned examples — he's mostly trying to show similarities in size between black adults and white children in the early period.

It's less an argument about the economic status of the deceased and more an argument about slaveowners' understanding of slaves as dependents on par with children during the earlier period. I'm still going through the ledgers, but many slaveowners commissioned stones before 1780. In the later period, it seems that more free blacks commissioned their own (or family members') stones rather than having them erected by owners. The language of the epitaphs changes as well — less "Peg, a negro servant of Henry Bull" and more "Margaret, daughter of Cuffe Benson and Phebe his wife."

I'm particularly interested in dissecting the specific data for free black women to see how widows fared vs. single women and wives.

One unfortunate thing - several of these stones have disappeared since Garman wrote. I've been compiling my own small database, but he has at least four stones that no longer exist or have been substantially damaged. Tasjian & Tashjian have a few more in their 1988 article. It makes me wonder if I might go over to the side advocating for replacement with reproductions in some select cases.