I (Apparently) Married Into the Beecher Family

While working on Pete's family tree, I found a fun family history fact: Pete is the second cousin (seven times removed) of Lyman Beecher, which, I think, makes him the third cousin of Harriet Beecher Stowe.

Pete's great-great-great grandmother, Marcia Willis Allen, was the daughter of Sylvia Beecher, whose great grandfather, Joseph (b. 1698), was the brother of Nathaniel Beecher, who was Lyman Beecher's grandfather. I've drawn a diagram, which is slightly more effective at showing this relationship, but it's tough to reproduce on the computer. Here's the best I can do (the vertical arrows indicate a parent/child relationship): 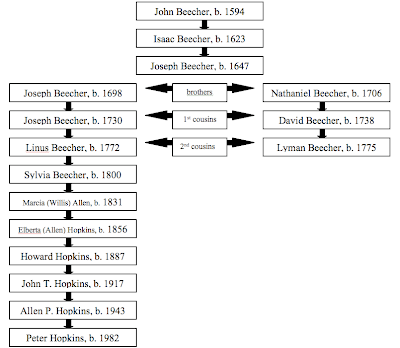 I'm not a genealogy expert, so please let me know if I've gotten the terminology wrong here. In any event, Pete can now trace one strand of his family back to the Great Migration and a specific location in England (Kent), so that's exciting.

Also, his ancestors inspired mobs to burn down convents.

Update (1/18/09): Ok, another big "duh" moment for me. I've been going around telling people my husband is a second cousin of Lyman Beecher and have been sort of surprised that most people are underwhelmed by this news. I couldn't figure it out until I realized that "Lyman Beecher" probably meant nothing to my in-laws or their friends. When I started saying "third cousin of Harriet Beecher Stowe" instead, I got much better reactions. Thus, I am adding an updated diagram that includes Mrs. Stowe and am laughing at myself for not thinking of adding her in the first place. 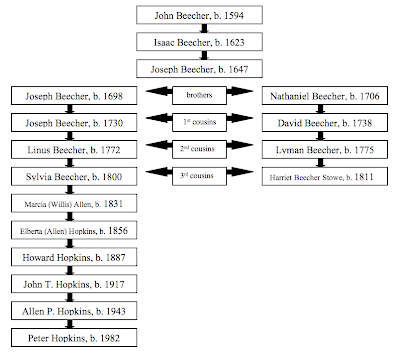 I think these long links are great fun, and the serious point they show is how few generations it really takes to link together a whole continent or encompass vast ranges of history. From the Puritan migration to today is roughly 10-12 generations. I've seen an estimate somewhere and don't recall what it was now (so correct this if you know), but something like 50 million people in the US can trace at least one line back to the 20,000 who settled in New England from 1620-1640.

The recent presidential election provided a nice illustration: Barack Obama is a descendant of Massachusetts Puritan immigrants Edward FitzRandolph (b1607) and Samuel Hinckley (d1662) of Scituate. Sarah Palin is a Mayflower descendant and has quite a few other Puritan ancestors as well. (I turn out to be her 12th cousin once removed, with me in the descendancy.)

There's a fellow at NEHGS named Gary Boyd Roberts who has published lots of essays and columns linking people up this way, and they have been gathered various places under the title "Notable Kin." I had fun a few years ago looking through his volumes for links I could make, and put them together here:

Your husband probably has lots more to be found.

Thanks for the confirmation and the tips. I'll definitely look into the "Notable Kin."

We've spent most of this past holiday week investigating the family history, and as far as I can tell, my husband is related to every Yankee in Connecticut. The big question mark at the moment is whether we can follow one of his family lines back to the Mayflower. There's a promising connection to Giles Hopkins, but we have to document it more definitively. His 18th-century ancestors were Tories, and it's a bit tricky to trace them when they move to Canada after the revolution.

I'll have to poke around and see if there's any way to connect the family to the Obamas — my mother-in-law would be tickled to death.