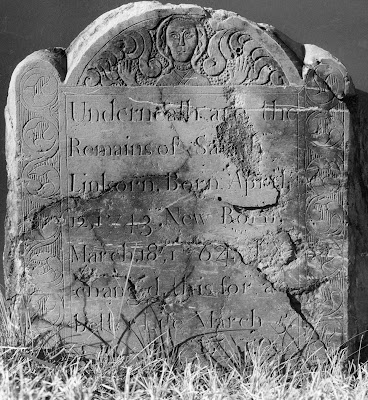 Sarah Linkorn, Attleboro, MA, 177[9?]
photo from the Farber Gravestone Collection
Aha! The humanities aren't usually predictive but I totally called this one.

The imageryon this stone is wonderful. The raised hands and swirling clouds imply that the deceased had a direct spiritual connection with God. The clothes appear to be a kaftan, a chunky necklace/choker, and (maybe) a headband. This is just a guess, but this attire may suggest a Holy Land/primitive Christian association.

Judging from the image (even without the epitaph), I would guess that Sara Linkorn belonged to a Methodist or charismatic Christian church. Since she converted in 1764, Sara may not have been a Methodist (Methodism reached New England a few years later). Does anyone know what other spiritual/charismatic/primitivist Christian sects were active on the MA/RI border in the 1760s?

Methodism had certainly reached Attleboro by the 1780s. Another gravestone in Attleboro (Marcy New, d. 1788) also features a face with raised hands, along with a Methodist hymn:


A guilty weak & helpless worm
on thy kind arms I fall:
Be thou my strength & righteousness
My Jesus & my all.

Also of note — I've been looking for a "Linkorn" family in Attleboro, but have had no luck yet. There is, however, a large family named "Lincoln" . . .
Posted by Caitlin GD Hopkins at 5:25 AM

These are lovely examples. If you haven't picked a thesis project yet, this is just the sort of thing that might work. Benes' "Masks of Orthodoxy" tried to make a link between stonecarving and denominationalism, but I seem to recall thinking it was a bit of a stretch when I read it. But this case looks pretty clear cut.

I see that the carver's name was New -- perhaps he was the official Methodist carver for the region. And where did he pick up the design? Is it an import, or a local innovation?