During the eighteenth century, most New England gravestones encoded the language of patriarchal hierarchy into their epitaphs. White women, children, and enslaved African Americans of all ages were almost always identified in terms of their relationship to white, male heads of household. For example, you might find a series of gravestones with these epitaphs:

In all of my gravestone hunting, I have only found one 18th-century carver — Obadiah Wheeler — who regularly identifies white men in terms of their relationships with their family members. Wheeler lived in Lebanon, CT and his work can be found in many of the surrounding towns, including Windham, Lebanon, Norwichtown, Coventry, etc. He doesn't always add "husbband" to men's epitaphs, but my informal, casual efforts have identified several examples: 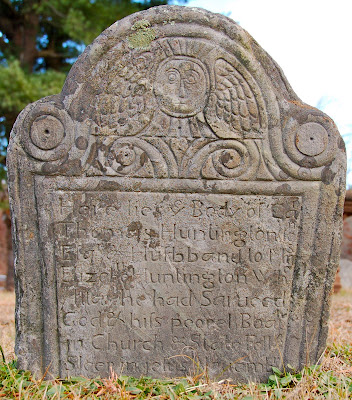 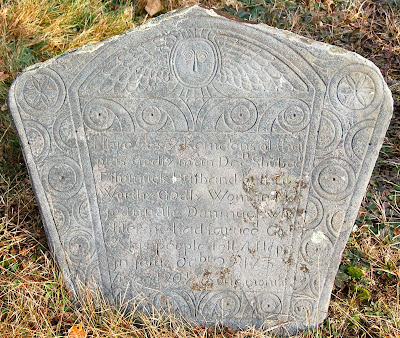 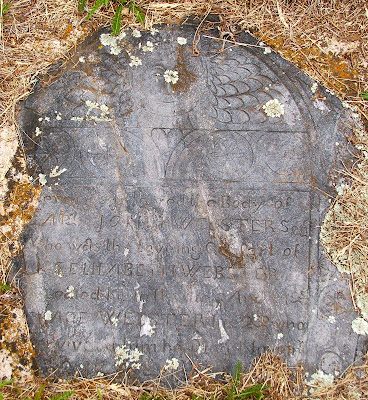 "Capt Jon- Websters who was the loveing Consort of Mrs Elisabeth Websters"
Lebanon, CT
—*—*—*—*—*—*—*—
Sadly, I can't read the inscription of this one, but the words "Husband" and "Sarah" are legible: 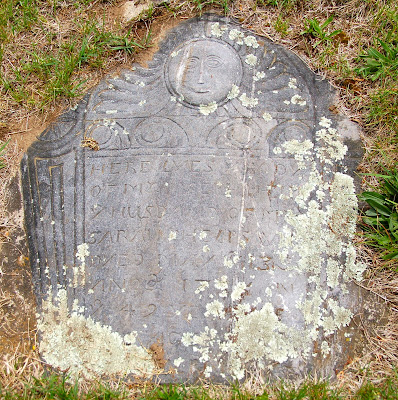 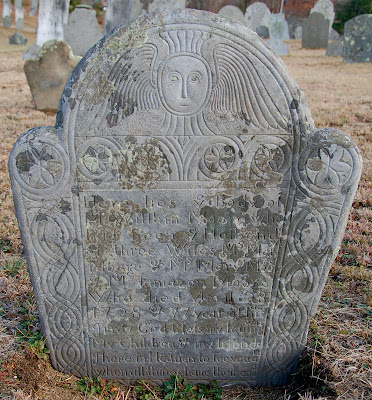 Here lies ye Body of
Mr William Moore who
had been ye Husband
of three Wifes Mrs Mary
Moore & Mrs Mary Moore
& Mrs Tamazon Moore
Who died April 28
1728 & 77 year of his age
I pray God Bless my louing Wif
My Children & my friends
I hope in Heauen to see you all
when all things have their ends
I should also mention that "Tamazon Moore" is going on the list of great names.

—*—*—*—*—*—*—*—
Wheeler's quirk didn't really catch on — later local carvers seem not to have replicated it much at all. I did find one exception. This stone was carved by Jonathan Loomis in 1776. Slater notes that Loomis was stylistically influenced by Wheeler, saying,


[Loomis' stones] are of large size with faces that are rather crude resemblances to those carved by Obadiah Wheeler. The Wheeler influence is also evident in the frequent use of the central Heart and stemmed six-rayed rosettes in the horizontal below the face (Slater, The Colonial Burying Grounds of Eastern Connecticut, 17). 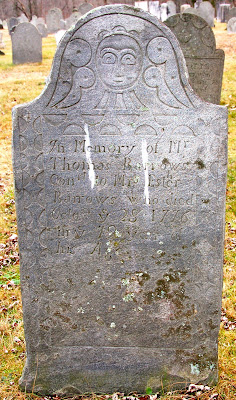