Today is the 239th anniversary of the Boston Massacre. I'm stuck in bed with the flu, but if anyone out there is healthy and interested, there will be several commemorative events over the next few days.

If you are looking for an excellent play-by-play account of the Boston Massacre, I can't think of anything better than Hiller B. Zobel's helpfully titled, The Boston Massacre. If you're looking for clear writing, extreme detail, and a fairly even-handed account, Zobel is for you. I particularly appreciate his efforts to put the "massacre" in the context of other violent incidents during the winter of 1769-1770.

If neither reenactments nor reading appeals to you, you can always stop by the Granary Burying Ground and place a stone on the monument dedicated to those killed on March 5, 1770 (and Christopher Snider, d. 2/22/1770). Just watch your step lest you get a little closer to the dead than you had originally planned. 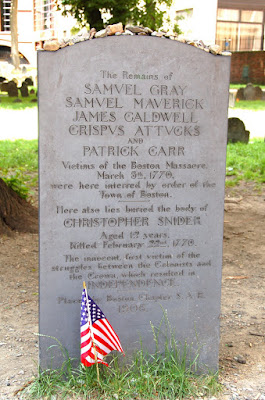 Posted by Caitlin GD Hopkins at 11:25 AM