Merely counting the number of children named Jeff Davis or Stonewall Jackson does not tell the whole story. These names waxed and waned in popularity over time. Examining the chronology of naming patterns may help us determine whether certain explanations are plausible or unlikely.

Some names were much more popular during the war than afterward. These charts show the birthdates of black men and boys named Jeff Davis (or Jefferson Davis or Jefferson D.) who appear on the 1880 Census*: 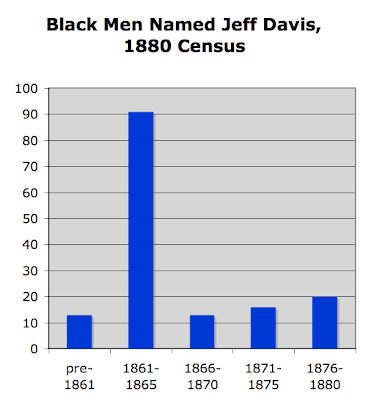 As you can see, "Jeff Davis" was a much more popular name for black children during the war than afterward. The initial dropoff was dramatic, though the name gained slightly in popularity over the next decade.**

Another name that was much more popular during the war than after was "Stonewall." Like Jeff Davis, Stonewall gained in popularity after its initial dropoff — it actually made more of a comeback than Jeff Davis. This chart includes people named "Stonewall" and "Stonewall Jackson": 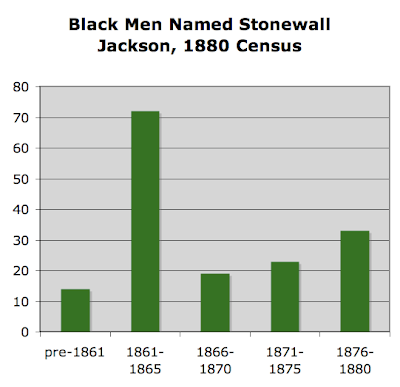 These two charts have similar patterns, so they can be considered convergent for the purposes of testing theories about naming practices. But what do we do with this one? 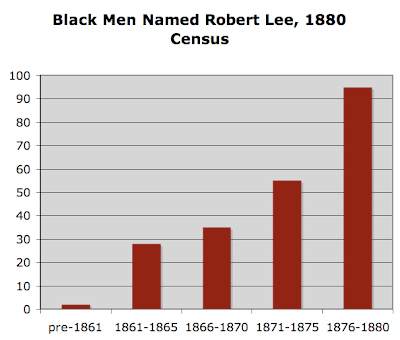 In the immortal words of Sesame Street, one of these things is not like the other. Whatever explanations we come up with for why black men and boys were given the names of Confederate heroes must account for the fact that different names had starkly different patterns of popularity.

*A few notes of caution: I did not include black men named "Jeff D." because a large percentage of them were born before the war, indicating that this name may not have been intended to honor Jefferson Davis. It is also possible that the 1880 Census underreports people named Jeff Davis during the war and its immediate aftermath because some may have died and others may have elected to go by other names later in life.
**Since this graph includes only people who were alive in 1880, it is possible that the name did not actually gain in popularity, but that fewer children born in earlier years were still living in 1880.
Posted by Caitlin GD Hopkins at 7:34 AM