Usually, when a gravestone is dedicated to more than one person, the people are related. They may be spouses, siblings, or parents with their children.

Very rarely, I come across gravestones where the people are not obviously related. They tend to be young people of the same sex.

In some cases, I think they might be cousins. For example, Elizabeth Titcomb (d. 1781, age 20) and Elizabeth Dummer (d. 1779, age 22) of Newburyport, MA may have been cousins. According to the Newbury Vital Records, Hannah Titcomb married John Dummer in 1755 — she may have been a sister of Elizabeth Titcomb's father, Samuel. I can't tell for sure — all of these North Shore families are entangled and there are multiple Elizabeths, Samuels, Hannahs, and Johns in each generation. 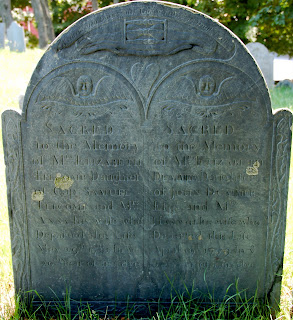 In other cases, the deceased do not seem to be relatives. Instead, they are buried together because they died together. For example, Paul Harrington (age 19) and John Ball (age 17) of Waltham, MA drowned together on June 24, 1771: 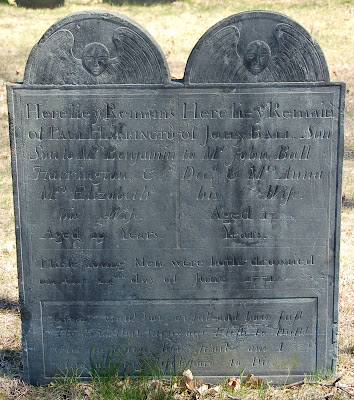 Here lie ye Remains
of PAUL HARRINGTON
Son to Mr. Benjamin
Harrington, &
Mrs. Elizabeth
his Wife.
Aged 19 Years.
Here lie ye Remains
of JOHN BALL, son
to Mr. John Ball
Decd, & Mrs. Anna
his Wife.
Aged 17
Years.
These Young Men were both drowned
on the 24th day of June 1771.
"Great God! how awful and how Just
"Thy law that turns our Flesh to Dust!
"O let me learn how frail am I
"And all my life Prepare to die.
This stone is quite beautiful — the carver made the two faces distinctive, though I do not know whether they truly resemble the boys. If they do, that would imply that the carver knew them, that he had portraits of them, or that he was in close enough consultation with the families to get a general description. 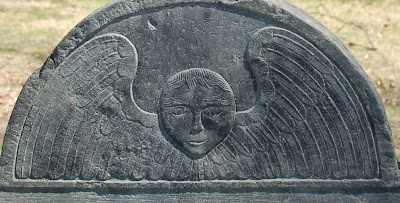 Have you ever seen a stone like these?
Posted by Caitlin GD Hopkins at 7:49 AM

I have not ever seen a stone like that--very striking faces, almost too lifelike somehow. Wonderful, in the old Puritan sense of striking fear into you!