Were 17th- and 18th-century gravestones custom carved or did customers purchase pre-carved blanks and pay for a custom epitaph? This is an important question for anyone who wishes to argue that the iconography of a particular stone is connected with the person buried under it.

The evidence seems to indicate that many stones were custom-made, but many (most?) were pre-carved.

It is easiest to argue that a stone was custom-made when it is of an unusual size/shape, when it displays a portrait of the deceased, or when the iconography is directly related to something mentioned in the text. If a stone is custom-made, there should also be consistency between the hand that carved the words and the iconography.

Thus, there little doubt that the Langley children stone and the Childs children stone are custom-made: they are too large, unusual, and specific to be pre-carved. Similarly, I would wager that the Jonathan Pierpont stone is a custom stone due to the minister-specific iconography and the correspondence between the letterforms and iconography. The stone for Desire Tripp's arm is definitely one-of-a-kind.

The Lee children stone (Phipps Street Cemetery, Charlestown, MA) looks like every other Lamson shop stone carved between 1730 and 1750 and the names of the children are squished into a space that is much too small. To me, this looks like a (rather large) blank that was intended for a single person, but purchased by the Lees for their children. 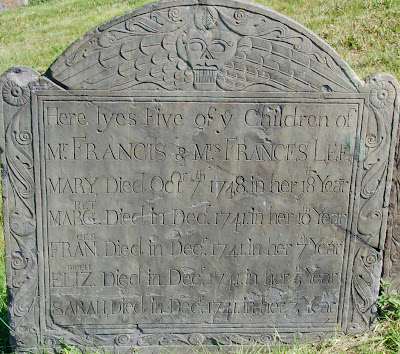 The Thomas Brown stone (NCBG, Newport, RI) is typical of William Stevens' early work, but the text does not fill the space allotted, suggesting that the border and tympanum carvings may have been done before the epitaph. 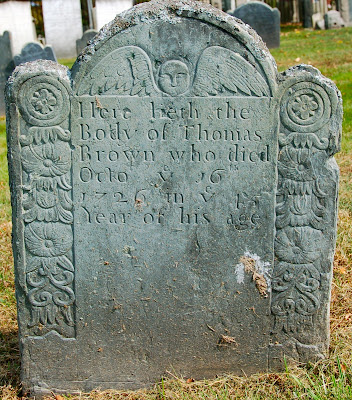 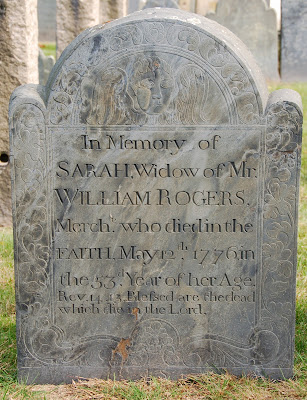 Next time: pre-shaped, but not pre-carved
Posted by Caitlin GD Hopkins at 1:03 PM