Yesterday, I presented some examples of gravestones made from  pre-carved blanks. It's also possible that some stones had custom-carved borders, but were made from pre-shaped blanks.

This possibility is visible when a stone looks like a standard, one-person, tripartite stone, but commemorates more than one person in both its text and its tympanum design.

In many cases, 18th-century gravestones have one lunette for each person named. Examples: 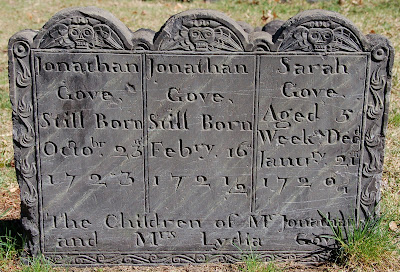 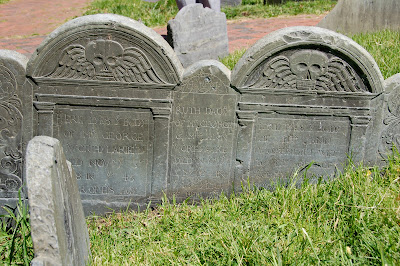 Worthylake Family
Copp's Hill, Boston
Sometimes, you find stones that have the shape typical of an individual stone, but multiple soul effigies corresponding to multiple burials: 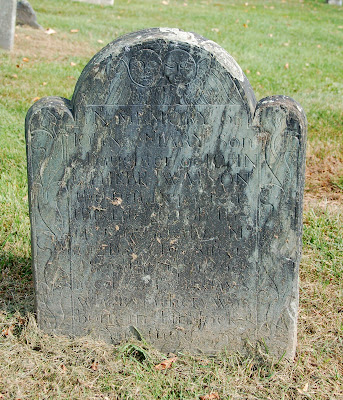 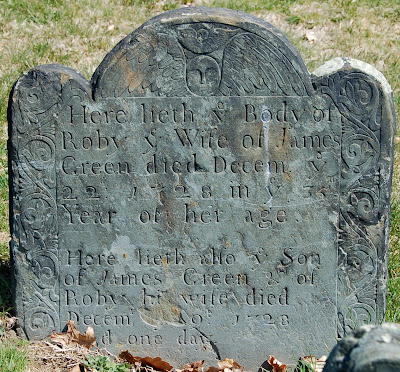 Roby Green & Child
Newport, RI
These make me think that, in some cases, customers may have chosen stones that had already been hewn into the standard shape, but were not yet embellished.
Posted by Caitlin GD Hopkins at 9:12 AM

How often do you think the customers actually saw/selected the stones in person? City residents might have visited a carver's shop, but I bet in the countryside many people never saw the stone until it arrived finished at the cemetery.

The few apparent receipts from the Dwight workshop are all of the remote kind -- "Dear sir, I wish to purchase a pair of gravestones for my father, Mr. John Smith, who departed this life Jan 24, 1798, in the 82d year of his age."

Oh, that stone with the three stillborn babies on it is way sad.

I think that most customers did not have much input into the iconography, though it is possible that they may have requested a particular stone shape (like the Gove children stone). I think that the triple+ stones may be custom-made because they are uncommon enough that it might not make economic sense to pre-make unusual shapes. Since you need bigger pieces of stone, I would imagine that you would save the big pieces and carve them to order, rather than risk wasting a great piece of stone on a blank that never gets purchased.

I haven't done much research on this yet, so all I have to go on is the gravestones themselves, which provide limited clues.

Another thing I'm wondering about is how much control customers had over epitaphs. Sometimes, you see stones from the Boston or Newport workshops in a remote location that have a mistake that a local carver has attempted to fix. I'll put up an example.