"Tho' He Lived in a Land of Liberty, He Lived a Slave"

I was in Concord on Monday and visited the famous John Jack stone on Old Burial Hill. This is one of the most visited, most quoted African-American gravestones in New England (it is a replica of the original stone). 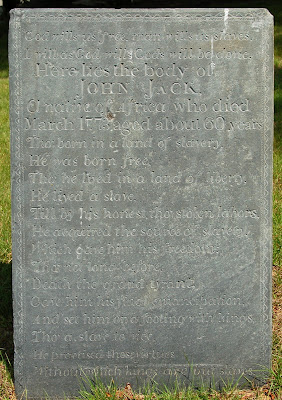 According to Joanne Braxton and Maria Diedrich in Monuments of the Black Atlantic, John Jack was once owned by Benjamin Barron of Concord. He bought his freedom and a small farm in 1761. Jack's wonderful epitaph was written by Daniel Bliss, a noted Tory and abolitionist who was forced to flee Massachusetts during the Revolution. John Jack's epitaph reads:


God wills us free, man wills us slaves.
I will as God wills Gods will be done.
Here lies the body of
JOHN JACK,
A native of Africa who died
March 1773. aged about 60 years
Tho' born in a land of slavery,
He was born free.
Tho' he lived in a land of liberty,
He lived a slave,
Till by his honest, tho' stolen labors,
He acquired the source of slavery,
Which gave him his freedom;
Tho' not long before
Death the grand tyrant,
Gave him his final emancipation,
And set him on a footing with kings.
Tho' a slave to vice,
He practised those virtues
Without which kings are but slaves.
Posted by Caitlin GD Hopkins at 9:47 AM