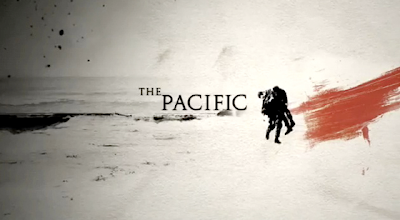 I watched the first episode of The Pacific with my parents last night and was actually a bit disappointed.

Of course, I understand that it's not supposed to be Band of Brothers: West Coast, but I thought that the first half hour was a muddle. The boot camp episode in BoB introduced all of the characters and established them in time and space, but the first half of this first episode jumped among its 3? 4? main characters in a way that was hard to follow. Instead of introducing one, then another, then another, it switched scenes between Curly and Italian Guy, then introduced Southern Boy, and then, all of a sudden, we were at Guadalcanal with Curly 9 months later.

Maybe it's just that I have a hard time distinguishing between young white guys who are all dressed the same. I suppose they must have mentioned these characters' names at least once during the episode, but I've watched it twice and can't catch them (Curly introduces himself to a girl at the beginning, but his name is not repeated). I looked them up on IMDb, but having appearance-derived nicknames helps me keep them straight. I gather that Southern Boy is from the South because of his family's accents and that Curly is from the Northeast somewhere because the bus depot had a bus leaving for New York, but I have no idea about Italian Guy — Chicago? New York? No idea.

The battle scenes on Guadalcanal were harrowing, but, again, hard to follow. Some of that is intentional — confusion is an important part of the feeling for these scenes — but some was not. Who were those tortured dead guys in the jungle? American paratroopers? Fighter pilots? Australians? And how did Italian Guy's regiment get to Guadalcanal at the end of the episode? Did the American Navy fight its way through after we saw it get run off to sea? How long was Curly's unit on the island? We saw maybe two nights, but then they were all ragged and had week-old sores, so a month maybe? Some of this might heighten an authentic sense of experiencing random events with little understanding of the bigger picture, but it was not very satisfying as a narrative.

I think that the producers recognize that Americans know less about the war in the Pacific than the war in Europe, but I don't think that they make many concessions to that lack of knowledge. It's hard to know what's going on in the battles without going online and reading some background info (which I did between my 1st and 2nd viewings). A few well-placed lines like, "The Japanese are going to attack us from the sea," or "I'm glad our Navy was able to come back and drive off those Japanese ships that just sunk all our ships 5 minutes ago" would have gone a long way to making things clearer.

I was pretty excited to watch The Pacific — my Papa fought in the Pacific theatre, though not on the islands (he was in China-Burma-India, flying supply runs over the Himalayas). I'll probably keep watching, especially now that I've gone and read all of the auxiliary material that explains who all the characters are. I will reserve final judgment until I've seen more, but I thought that episode 1 was an inauspicious start.
Posted by Caitlin GD Hopkins at 2:02 PM