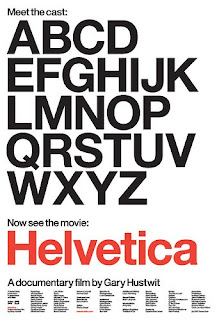 Last night, Pete and I watched Helvetica (2007), the documentary about the typeface. Unfortunately, I did not like it nearly as much as I thought I would.

Pete and I are the type of people who should have enjoyed this film. Neither of us is a graphic designer, but he is a software engineer with a particular interest in user interface, while I have spent the last week analyzing the lettering on a series of Newport gravestones in an effort to attribute them to individual carvers. We were primed to like this movie.

And yet, it was disappointing. I can identify at least three specific problems I found annoying:

1) Lack of historical context: The whole point is that Helvetica was introduced in the 1960s by modernists who wanted to replace the messy, subjective, nostalgic typefaces of the 1950s with something clean, crisp, neutral, and universal. Except for a brief (and wonderful!) segment on which a graphic designer flips through a magazine from the '50s to show some before and after ads, the film provides no examples of the "before" that Helvetica was meant to correct. I would have liked a bit more background — how did typefaces change over the course of the early 20th century or even *gasp* the 19th century? Not a whole long segment, just a 3-minute montage to place Helvetica in its historical context.


In the end, the way this film was Helvetica translated into movie form. It was crisp, clean, and uncluttered. This philosophy actually exposed the central fallacy of Helvetica, which is the belief that text can be transparent, neutral, and universal. As it turns out, without context, it's all just dull and unimportant.
Posted by Caitlin GD Hopkins at 12:25 PM