Here's another original composition — at least, the power of Google cannot find another example and I've never encountered it elsewhere: 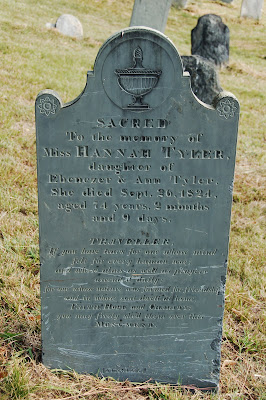 SACRED
To the memory of
Miss HANNAH TYLER,
daughter of
Ebenezer & Ann Tyler.
She died Sept. 20, 1824,
aged 74 years, 2 months
and 9 days.
TRAVELLER,
If you have tears for one whose mind
felt for every human woe;
and whose alms as well as prayers
ascended daily;
for one whose nature was formed for friendship
and in whose soul dwelt at home,
FAITH, HOPE and CHARITY;
you may freely shed them over this
MONUMENT.
How do alms ascend? Isn't the point to keep them here on earth for the relief of the poor?
Hannah Tyler, Providence, RI, 1824
Posted by Caitlin GD Hopkins at 9:50 AM

Is that the carver's name at the bottom? I can't quite make it out.

Yes, it's from the Tingley brothers' shop.