Zipporah Hughes of Norwich, Connecticut has an epitaph composed by Alexander Pope. Ok, not composed specifically for her, but still. Hughes' epitaph is from Pope's "The Dying Christian to His Soul"(1712). The poem was set to music and sung in many Christian churches during the 19th century, but I don't know whether it was a hymn in the late 18th century. The final two lines are quite popular for New England epitaphs, but the four-verse quotation is rarer.

Sacred to the memory
of Mrs. Zipporah
Hughes, consort of
Capt, John Hughes, she
departed this life Janr.
3d 1799. in ye 75th
year of her age.
Lend, lend your wings!
I mount! I fly!
O Grave! where is thy victory?
O death! where is thy sting? 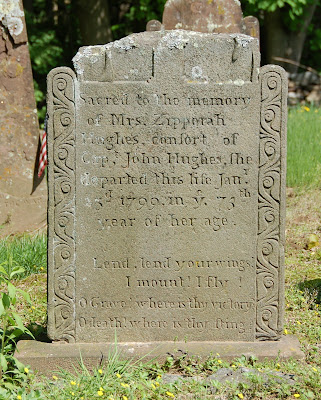 Posted by Caitlin GD Hopkins at 7:59 AM