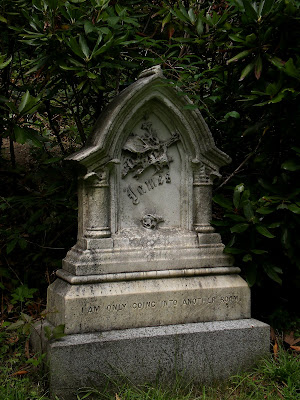 Here we are. More than a year after I started documenting the many synonyms for "died" carved on New England gravestones, I've reached 101. I was holding out for one that said "The End" or something similar, but, as yet, I've had no success in finding one.

Thanks to Emily G. for sending me this lovely example from Mount Auburn Cemetery in Cambridge, MA. I don't know the year or the deceased's last name, but it looks to be a mid-19th-century stone. Under the name, James, it says, "I AM ONLY GOING INTO ANOTHER ROOM."

Although I've reached 101, I still have a few more examples to post. I'm sure that I'll continue to find more over the coming years — perhaps I can drop some of the earlier entries that are similar to one another (i.e. "killed by a cart" vs. "killed by a wagon").

Congratulations on a series well done!

Maybe Dorothy Parker should have the last word:

Razors pain you;
Rivers are damp;
Acids stain you;
And drugs cause cramp.
Guns aren't lawful;
Nooses give;
Gas smells awful;
You might as well live.