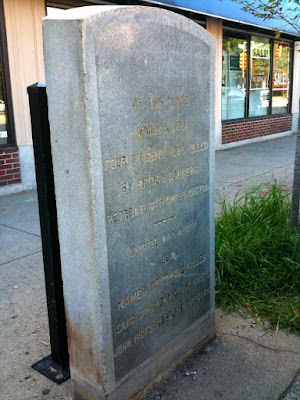 I live in an area of Cambridge that used to be called "Watson's Corner." There's an historical marker near my house that tells the story of four local men who were killed by retreating British soldiers after Lexington and Concord. 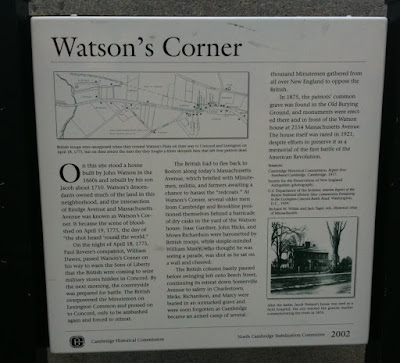 The language of the explanatory plaque is extraordinary. The central paragraph portrays the skirmish as a an encounter between innocent civilians and bloodthirsty soldiers. I've italicized bolded some of the key words:


The British had to flee back to Boston along today's Massachusetts Avenue, which bristled with Minutemen, militia, and farmers awaiting a chance to harass the "redcoats." At Watson's Corner, several older men from Cambridge and Brookline positioned themselves behind a barricade of dry casks in the yard of the Watson house. Isaac Gardner, John Hicks, and Moses Richardson were bayonetted [sic] by British troops, while simple-minded William Marcy, who thought he was seeing a parade, was shot as he sat on a wall and cheered.


If I had to guess when this was written, I would guess 1875. I would be wrong — this sign was erected in 2002. Perhaps they just lifted the language from a 19th-century town history.

First, by "harass the 'redcoats,'" the writer of this sign means, "shoot guns at the redcoats, attempting to kill as many of them as possible." Just to be clear.

Gardner, Hicks, and Richardson may have been "older," but the implication here is that they were enfeebled rather than dangerous. In fact, Gardner was 48, Hicks about 50, and Richardson 53. I suppose that hard work and lack of medical care could have aged these combatants prematurely, but I remain unconvinced that a 48-year-old with a gun is a harmless little old man.

I have been unable to find a contemporary account that stipulates that Gardner, Hicks, and Richardson were killed with bayonets. They may have been — I don't know for sure. Killing someone with a bayonet is certainly a more personal way of killing and thus seems more savage and vicious than killing from a distance. I would be a little surprised to learn that the British soldiers did bayonet these three men — by 6:00 on the evening of April 19th, they had been marching and fighting for nearly 24 hours. It takes some strength to kill a man with a bayonet, though I suppose they may have found strength in frustration.

I didn't know that people still used the term "simple-minded."

Despite my problems with the language of this account, I was pretty excited to find this monument. There was a real Revolutionary War battle right around the corner from my house! It's no Frog Battle of 1754, but it's something.

What historical events happened where you live?
Posted by Caitlin GD Hopkins at 7:47 PM

> What historical events happened where you live?

I could see this one from my window if there weren't an ugly building in the way.

(I adore historical markers. They are often the first things I notice and the most significant psychic anchors in any human environment. It's too bad people can't post images directly in these comments. It would be fun to see a whole collection of markers in your readers' neighborhoods. Perhaps you could start another series.)

Blogger's Scribe styling italicizes all quotations, so we can emphasize certain words only through boldface, alas.

I live in Manassas, VA. (Battles of First and Second Manassas or First and Second Bull Run in the Civil War.) The train station I use to get into downtown DC is the same one they fought over twice. It's a great town for a historian!

And I love the blog!

I live a few miles from Horse Slaughter Camp, where Colonel George Wright had over 800 captured Indian horses shot in 1858: http://www.historylink.org/index.cfm?displaypage=output.cfm&file_id=5142

As an addendum, the sign says that the men of Watson's Corner were buried in the Cambridge burying ground and a special marker was placed to honor them. Do you have a picture? I seem to remember some special marker right beside the Garden St. fence, but I don't recall the details.

Thanks for pointing out that formatting issue — I should always remember to check a post after I publish it.

There is indeed a marker at the Garden Street Burying Ground. I'll post pics in a moment. I think that Isaac Gardner is buried in Brighton, but I have never visited that graveyard.