Great Seal of the Commonwealth of Massachusetts 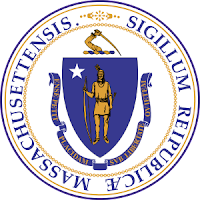 The Great Seal of the Commonwealth of Massachusetts is not the most elegant of state seals. Most state seals are cluttered and Massachusetts' is cleaner than some (I'm looking at you, Wisconsin, Oregon, and Hawaii), but it still has a lot going on. There's no harmony between the elements: a random star, an out-of-proportion arm floating vaguely above the shield, and a wordy, counterclockwise banner surrounded by clockwise Latin outer ring.* At least Massachusetts' seal only uses four colors — Montanans and Californians need the big box of Crayolas.**


a shield having a blue field or surface with an Indian thereon, dressed in a shirt and moccasins, holding in his right hand a bow, and in his left hand an arrow, point downward, all of gold; and, in the upper corner of the field, above his right arm, a silver star with five points. The crest is a wreath of blue and gold, on which in gold is a right arm, bent at the elbow, clothed and ruffled, with the hand grasping a broadsword.

The motto, "Ense petit placidam sub libertate quietem" ("By the sword we seek peace, but peace only under liberty") was written by Algernon Sidney, presumably sometime before he was executed for treason.

My favorite part of the seal has always been the disembodied arm swinging the sword. There's a Massachusetts monument at Gettysburg that has an arm rising out of the top — when I was a child, it always made me think of zombies.

According to the Secretary of the Commonwealth, the sword was first added to the seal in 1775, but it doesn't seem to have become disembodied until at least 1780. Yet, we find it on the Benjamin Chamberlin gravestone in Pepperell, MA (dated 1778): 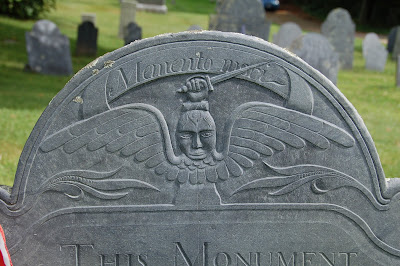 There are a few possibilities here:
Has anyone seen the arm and sword on an object that can be positively dated pre-1780? If not, the second possibility seems more likely. It might help me determine how long it took for communities to erect gravestones for men who died far from home during the Revolution. 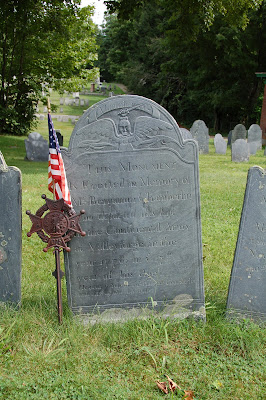 THIS MONUMENT
Is Erected in Memory of
Mr. Benjamin Chamberlin
who departed this Life
in the Continental Army
at Valleyforge in the
year 1778; In ye 17th
year of his Age.
He was ye Son of Mr. Phineas Chamberlin
and Mrs. Lydia his wife.
*I say this, of course, with the caveat that I know nothing about heraldry. It may fit the conventions very nicely, but I still think it's ugly.
**The best state seals (in no particular order): Rhode Island, Texas, Louisiana. Mississippi would be a contender if they hadn't just lifted their design from the US seal.
Posted by Caitlin GD Hopkins at 11:04 PM

As it appears on the Seal of the Commonwealth, this would be called an arm embowed in herladic terms (bent at the elbow). Arms embowed are very common heraldic charges, and you see them equipped with swords, hammers, axes, crosses, etc. They sometimes appear as charges on the shield proper, and sometimes issuant from the crest (as here)

Probably the most famous Massachusetts example of a sword-bearing arm embowed is the Bedford Flag, which dates to the early 1700s.

RJO has done a very good job in the first comment. You may see scads of examples in Fairbairn's Crests. When armored, the arm is sometimes described as "vambraced," from the wonderful term for the piece of armor that covered the forearm.

Sidney errs a bit in including the twisted silks (the wreath, bandeau, or torse) as part of the crest. The crest sits atop the wreathed helm.

When shield and crest are displayed, like this, w/o helm, the proportions are often, as you note, messed up. Seems a feature of 'degenerate' late 17th, and later, heraldry. Helmets are often miniaturized as well. But, then, some of the earliest depictions have undersized helms (see Heidelberg Codex),

Thanks for this information.

I guess that means that the stone could have been carved in 1778 — it was not necessarily inspired by the 1780 design.

Since there is no definite death date and the wording implies that the body is probably not there, it's still possible that it is a post-1780 stone, but that would be hard to prove unless I found another reference to it.

My guess is that dating to that degree of accuracy would be difficult in this case. As you note, since it looks like it's a cenotaph it's reasonable to think the stone may have been carved a little bit later than would be usual for an ordinary burial; and yet the style is generally consistent with Park-shop stones from the late 1770s. I think the heraldic arm is probably generic enough that any artistically-inclined craftsman of the time would have been familiar with it as a device, independent of its use in the Seal, and so stone and Seal aren't necessarily connected (though they could be).

I think what somebody needs to do is a very fine-grained study of stylistic chronology for one of the better-known carvers. There have been lots of good general studies of style development, but something that looks at, say, 50 carving details in, say, 200 stones from one shop over a period of just 20 years -- that might reveal some interesting things about dating and variation, and the extent to which stylistic details can be used as date-markers.