How Much Did Gravestones Cost?

This is one of those basic factual questions that should be relatively easy to answer, but isn't. I have a few data points from different times, workshops, and styles of stone that suggest that the answer is, unsurprisingly, "it depends."

The records of the John Stevens Shop in Newport, RI provide some of the best information. During the 1730s, the Stevens shop charged £12-15 for a table-like "Tomb Stone," £1-3 for pairs of upright gravestones, and 2 pence per letter for inscriptions.

Thus, the heirs of Captain William Wanton paid £17, 5 shillings, and 6 pence for his elaborate tombstone on December 24, 1733 — £15 for the stone and the rest for 273 letters.* A year earlier, Samuel Lindon paid £3, 8 shillings, and 4 pence for a pair of gravestones with a 40-letter epitaph "for Priscilla."
In the 1780s and 1790s, the Stevens shop was selling cheap gravestones to free African-Americans for £1-2. In December of 1787, Peter Cranston paid £1, 13 shillings for a pair of gravestones for Phillis Rivera's husband. In 1790, Newport Gardner paid for a gravestone for his daughter, Silva, with 10 bushels of potatoes worth 15 shillings.

For the sake of comparison, Quam Bowers paid the Stevens family £2, 14 shillings for a year's rent (1786-7). In the same month that John Stevens III cut a stone for Phillis Rivera's husband, he paid her £1, 7 shillings for 83 pounds of pork. Therefore, we might reckon the cost of the cheapest gravestones in Newport as costing half a year's rent (for a relatively poor family) or a substantial amount of food (Perhaps two months' worth of meat or potatoes?).

I've only begun to grapple with the Stevens shop records, which are the most extensive of any colonial gravestone carving shop. Other evidence is harder to come by.

There's the Lydia Bennitt stone in Columbia, CT, which cost $7.00 in 1791. I wonder how much it cost to transport that stone — it was carved by Zerubbabel Collins in Vermont and shipped to Columbia, presumably down the Connecticut River and then about 25 miles overland.

I think I've found another example of a price carved on a stone: the Isaac Parce [Pierce] stone in Pepperell, MA. 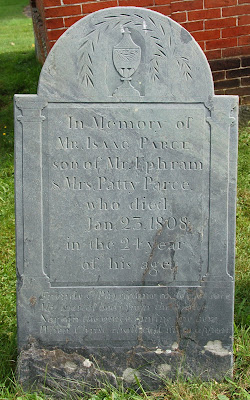 There's some carving in the ballast at the bottom that looks like "£6" to me. 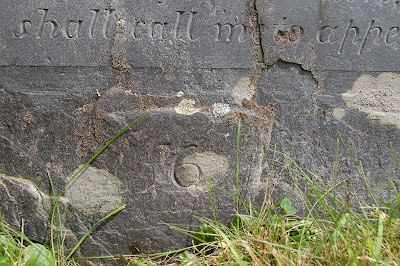 It might seem strange that someone was still reckoning cost in pounds in 1808, but Prof. Ulrich shows in A Midwife's Tale that Martha Ballard and her neighbors used pounds and shillings until at least 1812. The whole monetary system of the Early Republic was a mess — see Stephen Mihm's A Nation of Counterfeiters: Capitalists, Con Men, and the Making of the United States (2009).
Unfortunately, I don't know much about other prices in Columbia or Pepperell, so it's tough to make a comparison. That's a next step.
*"Capt. William Wanton" would be a good character name for our Fanny Forward novel. I fear for Fanny's virtue when Capt. William Wanton is abroad.
Posted by Caitlin GD Hopkins at 5:04 PM

I have seen quite a few stones with what I take to be prices carved roughly into the base, although as you've noted, the interpretation of these numbers is not obvious. In the Laurel Hill Cemetery in Fitchburg I noted the following dates and prices:

Money before the Civil War is extraordinarily confusing, as you say, and I know very little about it. Are these pound/shilling notations? Something else? In addition, there were periods of extreme inflation, such that a $3 stone one year might cost $9 the next year, with no change in material or workmanship.

I think I mentioned once before that the Hazen Library in Shirley (miraculously) owns a small collection of papers from the John Dwight household, including what appear to be seven receipts for specific gravestones. I say "appear" because the two stones I've been able to compare to the receipts don't have the same wording. I'm not exactly sure what's going on here -- it may be that these were just quotes rather than receipts, and perhaps Dwight didn't carve the stones in the end. The seven "receipts" date from 1810-1815 and the prices range from $3 to $18.

There are also certainly many probate records that specify amounts paid for gravestones -- this has always been the most definitive means for carver identification, going back to Forbes, so in principle one could put together a database of prices from this. I don't know that anyone's ever tried this, but it would certainly be interesting.