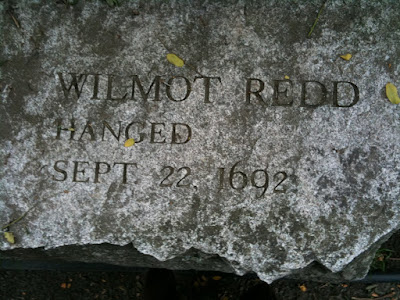 I meant to post this on Tuesday, but it slipped my mind. I take comfort in the fact that the Gregorian shift makes any "anniversary" celebrations for events occurring before 1752 imprecise anyway.

On September 22, 1692, eight people (seven women and one man) were hanged for witchcraft in Salem, Massachusetts. These eight were the last of the accused to be executed in the crisis.

A few weeks ago, Pete and I found ourselves in Salem and decided to visit the burying ground. Despite having been born in Beverly and having visited Salem dozens of times over the past 25 years, I have never visited the Salem burying ground before. It feels indecent somehow.

I don't think I can eloquently express my discomfort regarding the burying ground in Salem. I think nothing of going to the graveyard in Newburyport or Rowley, but Salem makes me feel icky. I can't decide which I find more off-putting – the crass Halloweenification that supplies tourists with "witchcraft trivets," the heartfelt but historically-illiterate outrage of neo-pagans who think that the crisis had something to do with freedom of religion*, or the solemn head-shakers whose tut-tutting generally strikes me (unfairly, I admit) as wholly inadequate. Perhaps my problem is that I'm embarrassed that my interests overlap with groups #1 and #2, however tangentially, and I fear being perceived as one of their number.

In any event, I'd never been to the graveyard in Salem.

It follows from this that I had never visited the Salem Witch Trials Memorial. The first time I heard it mentioned, I grimaced. What hideous, heroic bronze statue or candle-adorned memorial wall was this?

The sign pointing the way to that attraction did not inspire a lot of confidence. The shiny gold serif font on green seemed better suited to a sign for a pretentious casual dining restaurant or faux Irish pub. 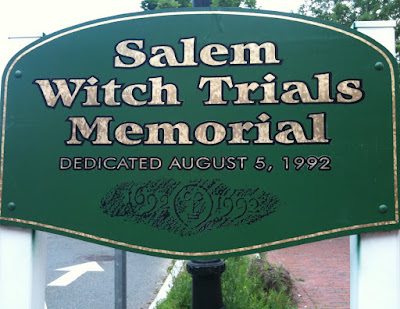 I immediately donned my scholarly armor. "I don't think there are very many Jonathan or Moses Worster stones this far east," I sneered.

Yet, I was pleasantly surprised by the memorial. It is a quiet, leafy park that you might not notice if you were not looking for it. A stone wall encloses a grassy rectangle about the size of a basketball court with several trees growing out of it. 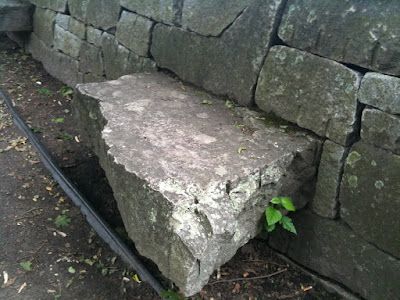 Pete had picked up a pamphlet at the lovely Salem Visitor Center, which explained the symbolism of each part of the memorial. The 20 granite benches serve as cenotaphs for the executed men and women whose graves are not marked. The trees are black locust trees, chosen by the architect because "the victims were hung from that kind of tree" (I'm going to need to see some sources on that). Protestations of innocence taken from the trial transcripts have been carved on the paving stones, the words interrupted by the walls. 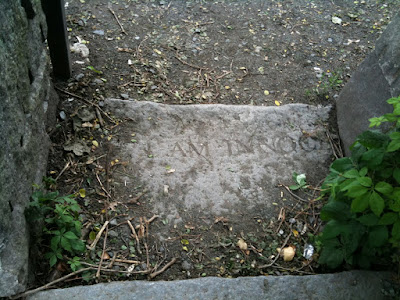 For me, the most affecting aspect of the memorial is that it is situated adjacent to the burying ground. At the back of the park, the wall gives way to an open fence – you can see the respectable gravestones of the community beyond the barrier. It's a poignant juxtaposition. Does the memorial reunite accusers and accused? Does it allow them to look across a transparent but impermeable barrier? Does it turn the accusation against the town by encouraging visitors to look into the graveyard from the memorial? All of these — it's an elegant element. 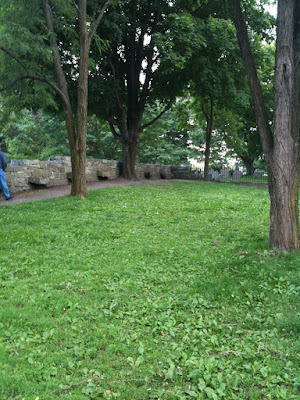 All things considered, I'm glad we visited. The Memorial was much better than I expected and I got to visit the Nathanel Mather stone in the graveyard. I don't think I'll be a frequent visitor — I like my burying grounds deserted — but at least I can say that I've been.

*To clarify, I do not think that all Wiccans, pagans, etc. are insufferable. I am speaking specifically of those maddening people who walk around Salem talking about the persecution of their "sisters" or fill their drippy MySpace tribute pages with "Never Again The Burning" bullshit.
Posted by Caitlin GD Hopkins at 8:14 AM

Very interesting. It sounds like it was well done (I haven't seen it).

I know what would make it more deeply educational and reflective: a plaque with the subsequent apology of the jurors who participated in the trial.

I visited there for the first time last summer (2010), and felt much the same way, more comfortable in the other (I forget the name), burial ground, with no other people in it. But I did get some pictures of some lovely stones in the Salem ground, and picked up a nice book on grave stones in the park service gift shop. I'm just beginning to learn about grave stones and have enjoyed your post greatly.

Although Salem is best known for it's trials, I believe Connecticut executed more "witches". One of my ancestors among them. Another was accused, but her husband confronted the judge and she was exonerated. C Trier